Range-topping version of Korean supermini is dressed to impress. 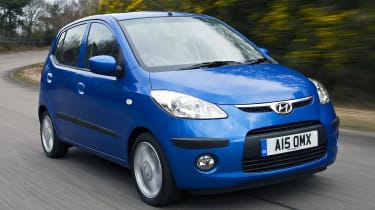 Stylish, well equipped and surprisingly competent to drive, the i10 makes a decent case for itself even before you consider the low price and excellent five-year warranty. The Korean firm is threatening Fiat’s crown as champion of affordable, cheery city cars, and rightly so. We would opt for a mid-range Comfort spec car, though, which does without the top-spec model’s sunroof and heated seats.

It has already provided the biggest upset the small car market has seen, but is it really destined for greatness?

When we first tested the mid-range Comfort version of Hyundai’s i10 in Issue 1,003, it quickly proved its worth and unseated the Fiat Panda as our favourite city car.

However, that model, which costs £7,095, has recently been joined by a flagship Style variant. Costing an extra £500, this version of the compact five-door hatch promises to build on the appeal of the Comfort with greater luxury – but at the expense of some of the lesser machine’s fuel and tax efficiency.

On paper the i10 certainly looks impressive: air-conditioning, heated front seats, electric windows and an electric tilt-slide sunroof are all inclu­ded as standard. The cabin also gets a silver finish to the dashboard and door handles, while a subtle spoiler has been added to the bootlid.

Returning a combined fuel economy figure of 54mpg, and producing 124g/km of CO2, the top-of-the-line i10 falls into tax Band C, while lesser models are in the lower Band B.

Ironically, it’s this car’s larger 15-inch alloy wheels that are at the heart of the change in economy and efficiency. But those bigger rims also help to improve the driving experience. Climb inside, and it’s immediately clear that Hyundai has left its budget roots behind. The i10 is as solidly put together as any rival – including the likes of the Panda – and never feels cheap.

The dash is modern, the dials clear and the controls are well laid out. We especially like the stereo, which has a large display and big buttons.

The revised 1.1-litre petrol engine is another strong point. It’s impressed us before, and combined with a manual gearbox offers plenty of performance around town. However, on motorways, there is no escaping the fact that this model only has 65bhp, and at fast cruising speeds the powerplant proves strained and noisy.

Still, despite the limited pace, the i10 handles well enough; the steering is responsive and there’s plenty of grip, thanks to those bigger wheels with their larger tyres.

Body control is decent, too – in fact, the super­mini’s road manners are comparable to that of the original Mini. That’s ‘Hy’ praise indeed...

RIVAL: Fiat Panda The boxy Panda is the quintessential budget city car, mating good looks with plenty of space and excellent driver appeal. However, the i10 is a tough rival that has a long kit list on its side.