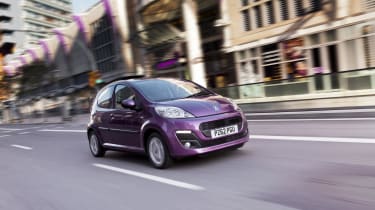 If the Peugeot 107 looks a bit like the current Citroen C1 and Toyota Aygo to you, you're not going mad - these three cars are based on the same chassis and were developed together with the three brands adding their own styling touches at the end of the design process. The choice between them, then, mainly comes down to how much you like the look of them, the difference in price and the dealer experience.

With small size and tiny engines on their side, these three cars make for a solid buy for those after a compact city car. The main rivals to look at are the Volkswagen up!, SEAT Mii and Skoda Citigo, which also share a platform - but with their more modern design, high quality interiors and affordable prices, it's hard to recommend the ageing Peugeot over any of them.

With a replacement looming, now called the Peugeot 108, the 107 is hard to recommend at the full retail price, but expect some good deals to appear as dealers sell off 107 stock.

The 107 suffers from a lack of boot space and a noisy cabin at motorway speeds, but the main concern for some will be the three-star Euro NCAP rating. That's because the Peugeot 107 and its sister cars were knocked down for not keeping up with the latest safety developments and standards.

The tiny 998cc three-cylinder engine in the Peugeot 107 produces 68bhp, and with its characterful exhaust note and distinctive thrum, it’s great fun to use and delivers nippy performance.

The light clutch and gearshift mean it's easy to drive, especially in town. Acceleration from 0-62mph in 14.2 seconds means it's less suited to higher-speed driving, though. There's too much wind and road noise to take it on a long journey, and the ride can get uncomfortable over rough roads.

The 1.0-litre three-cylinder engine boasts CO2 emissions of 99g/km and fuel economy is good too, at 65.6mpg. However, if you opt for the automatic gearbox these figures become 104g/km and 62.7mpg.

Insurance should be cheap too thanks to the small engine, so it could be a good choice for young drivers or those with an eye on their budget. There are also deals such as Peugeot's Just Add Fuel, allowing road users to purchase a Peugeot 107 for a fixed monthly price over three years that includes insurance, warranty, servicing, tax and roadside assistance for the whole period.

The Peugeot 107 is a cute city car design, with a sculpted short bonnet, LED daytime running lights and very compact dimensions. The short overhangs, neat wheel trims, great all-round visibility and vertical tail make it easy to nip about town in, and it's nice and easy to park as well.

The interior is best described as funky, thanks to the unusual heater controls that glow orange at night and pod-style speedometer, but it's just not as classy as the Volkswagen up!, for example.

Th entry-level Access trim level is the cheapest, but its very basic. Go for Active trim and you get features like electric front windows, air-con and remote central locking, while the top-spec Allure trim gets Bluetooth, daytime running lights and alloy wheels.

The tiny size of the 107 might be perfect for parking but it means space inside is very limited. The boot is a major weak point for the 107. The tailgate is a piece of glass and when opened it reveals high load sill and a capacity of just 139 litres. This boot extends with the seats down to 751 litres, but then you won't be able to carry any passengers in the back. 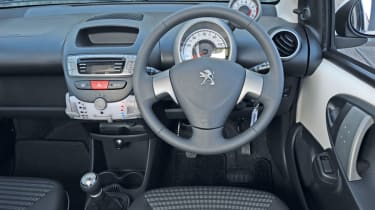 Even with the seats in place rear passengers will find there's very little space. The five-door model doesn't improve the rear space, but it makes getting in and out easier, and is a must for those fitting child seats regularly.

Peugeot's track record for poor reliability is enforced by the manufacturer's placing in our 2013 Driver Power manufacturer ratings, falling one short of last place at 31. It's worth remembering that the 107 is the same car underneath as the Toyota Aygo, however, which made it into the top 150 cars - even though it was only at number 146.

The 107's three-star Euro NCAP score is a problem for the car, awarded because it doesn't have the advanced safety systems expected of small cars these days. 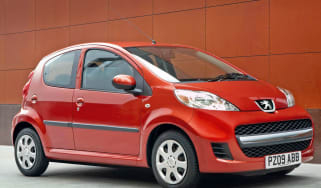 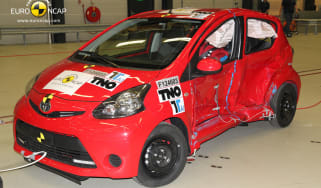 The facelifted Toyota Aygo, Citroen C1 and Peugeot 107 have had their Euro NCAP rating lowered to three stars
Peugeot 107 vs VW up! 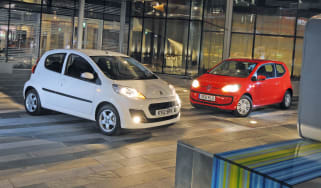 The Peugeot 107 has raised its game with a facelift. We see if it’s good enough to beat the VW up!
Peugeot 107 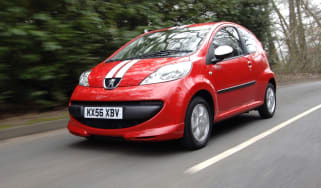 The 107 is good, but the go-faster stripes and bodykit ramp up the price by nearly a grand
Peugeot 107 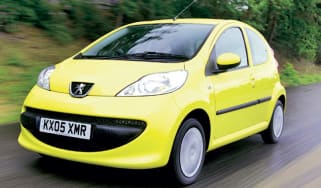 While Citroen's C1 is tempting buyers with three specs and a low price, the Peugeot 107 is banking on a simple gameplan. When sales of the little Lion…
Skip to HeaderSkip to Content