While Citroen's C1 is tempting buyers with three specs and a low price, the Peugeot 107 is banking on a simple gameplan. When sales of the little Lion start this week, there will be only one trim on offer. 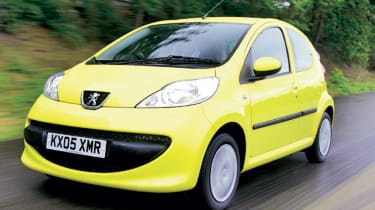 As with the C1 and Aygo, the fine 107 makes competition in this sector even stiffer. Its combination of fun looks, a sensible one-trim policy and plenty of kit, plus Peugeot's sporty image, will mean showroom appeal is very high. It's a shame there's no diesel and air-con is a £500 option, but the 107 makes great low-budget transport.

While Citroen's C1 is tempting buyers with three specs and a low price, the Peugeot 107 is banking on a simple gameplan. When sales of the little Lion start this week, there will be only one trim on offer.

At £6,995 for the three-door and £7,345 for the five-door, both with 68bhp 1.0-litre petrol power, the 107 Urban has virtually the same spec as the C1 Rhythm. In fact, the only item it omits is a rev counter - although it is optional, as is air-con, for £50 and £500 respectively. Visually, the 107 marks itself out from the Citroen with larger elliptical headlights, a restyled bumper and a prominent central Peugeot badge.

At the back there are coloured light clusters - the C1 gets clear plastic units - and as on the Citroen, the rear doors differ from the Toyota Aygo's by incorporating the C-pillar in the opening.

On the inside, the 107 is identical to its French and Japanese brothers. That is no bad thing, though. There is plenty of space up front, the seats are soft and comfortable, and the dash design is both contemporary and logical.

Items such as the big-buttoned, high-mounted CD player impress, and so do the plastics - they may not be of the highest quality, but there are plenty of contrasting colours to brighten things up. An array of cubbyholes in the doors, centre console and dashboard make up for the lack of a glovebox, too. On the move, the 107 drives similarly to the C1 and Aygo. Handling is nimble, the steering is light but positive both around town and at higher speeds, while performance from the throaty three-cylinder engine is peppy.

Long gearing means the 107 copes well on motorways as well, and fuel returns of 61.4mpg and 109g/km CO2 emissions match its brothers' figures. But if you want a diesel, you will have to go for the C1 or Aygo, as Peugeot has no current plans to offer one. Conversely, the 107 is available with an auto (for an extra £500), whereas the Citroen is not.

Negatives? Only a few - and they are the same for all these cars. The boot is big enough for the weekly shop, but its high lip makes loading tricky. And it is a shame there is no Smart ForFour-style sliding rear bench. The back windows on five-door models do not wind down, either, and the box is notchy.

But that's it! Add in group 1E insurance and a four-star Euro NCAP safety rating for all three, and you have got a cracking package. Right now, choosing between the cars appears to depend on no more than the badge you prefer.