The Peugeot 107 has raised its game with a facelift. We see if it’s good enough to beat the VW up! 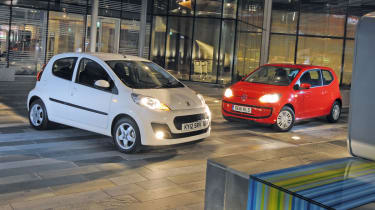 City cars are the ultimate way of getting from A to B in our gridlocked town centres. Compact dimensions, agile responses and brilliant visibility make them fantastic for taking on heavy traffic, whether you’re on the school run or nipping to the shops. And the latest smart-looking models won’t be out of place parked in front of a glitzy hotel or health club, either.
The impressive Volkswagen up! is the current class champion, as it set new standards for comfort and refinement in this market when it debuted late last year. However, even though the fanfare surrounding its launch has barely died down, it has a fight on its hands to maintain its status as the number-one city car.
The Peugeot 107 has been comprehensively revised and now provides more kit, value and style than ever before. There are only a few pounds between our duo on price – so how do they compare in the cut-and-thrust of city-centre driving?

There's never been a better time to buy a city car. The VW up! has breathed new life into the class and forced rival manufacturers to up their game.

The new Peugeot 107 is a demonstration of the old saying ‘competition improves the breed’: the revised model is better than ever. But is it good enough to take on the Volkswagen up! and win?

In short, no. While the 107 is smarter than before and combines lively performance with fun handling, it doesn’t have the all-round appeal of the VW. The up! has brought a new standard of refinement and comfort to the small-car market and it promises to be even more affordable to run than the Peugeot.

But the most impressive thing about the up! is its big-car feel. It has more space for passengers and luggage than the 107, while everything from the driving position to the cabin quality wouldn’t be out of place in a car twice the price. And that’s before you’ve even driven it anywhere.

Yes, the Peugeot is faster and more characterful from behind the wheel, but the way the VW switches effortlessly from city runabout to long-haul cruiser is genuinely impressive. This multi-tasking ability is what marks it out as something truly special. Make no mistake: the new Peugeot 107 is in good shape. But the VW up! is simply in another league.

The VW up! has revolutionised the city-car class – just like the Peugeot 107 and its Citroen C1 and Toyota Aygo sister cars did when they arrived in 2005. The up! has moved the game on further: it delivers big-car quality and comfort in a stylish and affordable package. It also takes both urban gridlock and long motorway trips in its stride.

We love the Peugeot for its fun handling, cheeky character and eager performance. Yet ultimately it falls short of the high standards set by the brilliant new VW. If you plan to never leave the confines of 30mph urban motoring, the 107 has plenty going for it, but the VW is far superior over longer distances and much bigger inside.