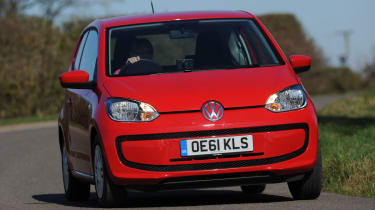 8
It's no exaggeration to say that VW’s up! has redefined what’s possible in the city car class. We were wowed by its comfort and practicality when we first tested it, so the Peugeot faces a tough task.
Like the Golf and Polo, the up! doesn’t dazzle you with flashy styling – its simple design is grown-up and handsome. Neat, squared-off lines and balanced proportions mean it looks very modern and compact.
Video: Watch CarBuyer's video review of the VW up!
[[{"type":"media","view_mode":"content_narrow","fid":"68821","attributes":{"alt":"","class":"media-image"}}]]
The up! has angled C-pillars and a glass-covered tailgate, which help to distinguish it from its SEAT and Skoda sister cars. Classy touches like the white
and chrome VW badges on the wheel trims and a cut-out grille give it a more mature appearance than the quirky 107.
The same unfussy approach characterises the VW’s interior. You sit much lower down in the up! than in the Peugeot, and the gloss black dash is mounted higher, too. The car feels more spacious and grown-up as a result.
Visibility is restricted by thick A-pillars, but unlike in the 107, you can adjust the height of the driver’s seat to get around this problem. The up!’s centre console is more conventional than the Peugeot’s – it’s easier to use, too, and boasts superb build quality.
The £275 optional Maps & More portable sat-nav adds a touch of hi-tech gadgetry to the up!’s interior and comes with a fixed mounting point on the dash to prevent messy suction-cup marks on the screen.
However, the best thing about the VW’s cabin is not the build quality or gadgets, but the sheer amount of space. Its wheelbase is 80mm longer than the 107’s, so the up! can seat four adults in comfort, while the boxy roof means headroom is very generous.
A boot divider allows you to choose from a flat floor that sits flush with the rear seatbacks or a larger 251 litres of luggage space. With the seats down, that rises to an amazing 951 litres – 200 litres more than in the 107. Up front, there’s a proper glovebox rather than an open storage bin in front of the passenger.
The weight of all this clever kit does have a negative effect on the VW’s performance, though. In fact, it’s 139kg heavier than the Peugeot – something that’s reflected in their performance figures. The 59bhp up! took 13.8 seconds to go from 0-60mph – over a second longer than the 107. But a wider torque band means it’s more responsive in gear and feels quicker behind the wheel.
Most city-car drivers tend to avoid motorway journeys, but the up! sets new class standards for long-distance refinement. The comfortable ride quality and smooth three-cylinder engine make it a surprisingly talented cruiser. Plus, although there’s less natural feel in its steering compared to the 107’s, it’s more composed at higher speeds.
The downside of these big-car dynamics is neutral handling that lacks the Peugeot’s fun factor, but most buyers will prefer the greater comfort offered by the VW.
It can’t match the 107’s fuel economy or free road tax, either, yet cheap servicing and good predicted residual values mean it makes more financial sense in the long term.

Chart position: 1WHY: Not many new cars achieve their aim of raising class standards, but the up! did when we tested it last year. Can the mid-range Move model hold on to the crown?