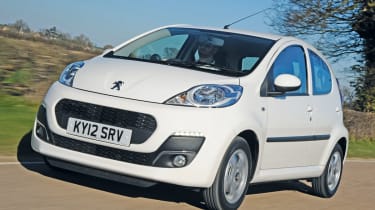 8
Peugeot's city-car pedigree is the envy of many manufacturers. It stretches right back to the brilliant 106 of the early nineties. Just like that car, the 107 has been a big success: more than 100,000 have been sold in the UK. Its charming mixture of fun handling and quirky looks has ensured that it remains a serious class contender.
However, the arrival of the VW up! has raised the bar in this class to new heights, and Peugeot has reacted quickly by giving its own city runabout a thorough facelift.
First on the chopping block for the 107 was its dated styling. The biggest changes are at the front, where the gaping grille from the outgoing car has been replaced with a much sleeker design. The range-topping Allure five-door in our pictures adds integrated LED lights and chrome inserts, although we tested the more basic Active in three-door spec.
Neater headlamps and a smooth bonnet that highlights the Peugeot badge round off the exterior changes. The tweaks definitely help smarten up the 107’s looks: its cuter design doesn’t seem out of place parked beside the ultra-modern Volkswagen. The familiar Access, Active, and Allure trim levels seen in the rest of the Peugeot range have now been extended to the 107.
To match the up!’s price, the entry-level Access is now £700 cheaper than the previous model. What’s more, standard equipment has been beefed up across the range. So the Active version we tested now has manual air-conditioning as standard, while top-spec cars get Bluetooth and a USB socket.
The 107 comes close to matching the up! for kit, but frustrating niggles do it no favours: the wing mirrors still adjust manually and you pay £40 extra for the optional rev counter pod.
The rest of the Peugeot’s interior also feels the pinch of cost-cutting measures. Exposed screw heads and low-rent materials aren’t something you’ll find in the up!, which does a far better job of hiding its affordability.
Part of the blame lies with the 107’s age, but no effort has been made to update the grey dash plastics or add useful extras such as height adjustment for the driver’s seat and a proper lidded glovebox.
Despite this, the Peugeot is still very practical, with plenty of useful storage cubbies and cup-holders dotted around the interior. But it trails the up! for luggage and passenger space. It’s shorter than the VW, and although there’s still a surprising amount of rear legroom, the restricted headroom means taller passengers will struggle to get comfortable.
The 107 also trails the up! for boot space, while the narrow opening and high lip make it hard to fit even small bags behind the seats.
On the road, the Peugeot’s buzzy little three-cylinder engine has to be worked hard if you want to make decent progress, but as the car is so light, it was quicker off the line than the up! in our tests.
This eager nature makes it well suited to tackling busy city traffic. The direct steering offers better weight and feel than you get in the up! and the 107 is a lot more fun to drive as a result. The playful nature of the chassis means it’s a real entertainer on country lanes, too, but you pay a price for this in the form of poor refinement on the motorway.
On faster roads, the noisy engine, tinny cabin and firm ride can become tiring, and our noise meter revealed that the 107 is over 4dB louder than the up! at 70mph. This lack of refinement in a city car would have been acceptable before the VW arrived, but the up! has raised the class standard and it’s down to rivals to match it.
Surprisingly, the 107 comfortably beat the up! in our economy test, returning 51.6mpg. Along with free road tax, that may be enough to sway some buyers towards the Peugeot – but will it be enough to beat the VW?

Chart position: 2WHY: Stylish new look gives 107 a well timed boost. Like the VW, it features a characterful 1.0-litre three-cylinder engine, and Active trim is quite well equipped, too.

Go Back to1st Volkswagen Move up!
Continue ReadingFacts and figures