The capable Hyundai i10 is the company's smallest model, delivering low running costs and an excellent five-year warranty 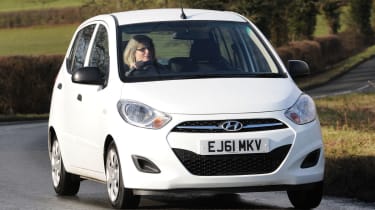 The Hyundai i10 has been a huge sales success for the manufacturer since it was introduced back in 2008, and it’s popularity soared during the Government’s Scrappage Scheme. It’s effectively a budget alternative to more stylish city cars like the Fiat 500 and Volkswagen up!, but there’s more to the i10 than a great-value price tag. In fact, the i10’s combination of ultra-low running costs, decent handling and an excellent five-year warranty ensure it’s still one of the best-selling cars in the UK today. It was given a mid-life facelift in 2011, with a new look and new engines. The latter included a 1.0-litre three-cylinder petrol engine that claims to return 67.3mpg and emits only 99g/km, which makes it free from road tax and the London Congestion Charge. An all-new i10 is set to be revealed at the Frankfurt Motor Show in September 2013, before going on sale at the end of the year. Details are still scarce but the new car is expected to get more distinctive styling and even more efficient engines.

The i10 is available with a choice of just two engines and there is no diesel option. The smallest engine is the three-cylinder 1.0-litre petrol unit in the eco-special i10 Blue. It develops just 68bhp and takes 14.8 seconds to reach 62mph. As you'd expect, it feels sluggish on the road, plus it lacks the smoothness and refinement that marks out the similarly-sized three cylinder unit fitted to the VW up!, SEAT Mii and Skoda Citigo. We'd recommend the 85bhp 1.2-litre four-cylinder engine, which is quieter and feels much more responsive on the road. Bother engines are mated to the a precise five-speed gearbox, while the Active model is available with an optional four-speed automatic transmission. Consistent steering and strong brakes are also big plus points, however, the low-rolling resistance tyres on the i10 Blue are less grippy.

This is where the i10 makes so much sense - and why it was the runaway success during the Government’s Scrappage Scheme a couple of years ago. With a starting price of around £7,000, the 1.2 petrol with a five-speed manual gearbox has an official fuel consumption figure of 61.4mpg and CO2 emissions of 108g/km, which means it will be free to tax for the first year and should cost very little every year after that. Opting for an automatic gearbox will cause these figures to drop to 51.4mpg and 129g/km. The i10 Blue is the most impressive model, though, thanks to low rolling resistance tyres, an eco-shift indicator and the inclusion of the firm’s Intelligent Stop & Go system. It offers tax-exempt emissions of 99g/km, an average mpg figure of 67.3 and falls into insurance group nine, which means it should cost very little to run. All Hyundai’s come with the firm’s Five Year Triple Care package, which includes a five-year unlimited mileage warranty, five years’ free roadside assistance and five years of vehicle health checks. There’s a range of fixed-price servicing deals, too.

With so many more distinctive cars available, it’s easy to overlook the i10. But while it lacks the retro looks of the Fiat 500 and the modern lines of the VW up!, it’s still an appealing option. It was given a facelift in 2011, with new headlights, taillights and bumpers inspired by the firm’s fluidic sculpture design language first seen on the ix20 and ix35. It still looks a bit slab sided and ungainly on its small wheels, but it’s certainly an improvement. The interior tweaks were subtle but included a redesigned instrument cluster and blue lighting on the display screens, while rear passengers now get a cupholder. The design is still far from exciting, but the range of robust plastics should be able to stand up to the cut and thrust of daily use. There are four specifications to choose from – Classic, Blue, Active and Style – but all versions come with a decent amount of kit. Entry-level Classic comes with air-conditioning, electric front windows and USB connectivity, but Blue cars have to make do with tiny 13-inch steel wheels. Active cars get 14-inch alloy wheels, body-coloured door handles, front fog lights and all-around electric windows, while range-topping Style cars also get heated front seats, a sunroof and a leather-covered steering wheel, gear knob and handbrake.

Despite its compact dimensions, the i10 is a surprisingly practical city car. The 225-litre boot is considerably more than the Toyota Aygo, Fiat 500 and Kia Picanto’s figures of 139, 185 and 200 litres respectively. In fact, it’s on a par with the much larger MINI Clubman and is only bettered in this class the VW up!. SEAT Mii and Skoda Citigo, which all offer 251 litres of space. You might struggle to make the most out of it capacity, though, as the boot is quite narrow and the loading lip very high. The rear seats fold to create a maximum load area of 889 litres, while Comfort and Style models also get a useful storage compartment located under the boot floor. The rear seats offer enough space for two adults or three children. Plus, as the i10 is only available as a five-door, getting into the back seats is easy.  All specs come with a temporary spare wheel as standard.

After finishing an impressive seventh in last year's Driver Power Survey, the i10 slipped all the way to a disappointing 135 in the 2013 Driver Power Survey. There have been no major recalls or problems with the i10, but owners have complained about its harsh ride quality. As for safety, Euro NCAP gave the little Hyundai a four-star crash test result when it was tested back in 2008. This equals the Kia Picanto’s result, but is disappointing when compared to newer rivals like the Volkswagen up! and Skoda Citigo. Standard safety kit includes anti-lock brakes and electronic brake force distribution, seatbelt pre-tensioners, Isofix child-seat fixings and a total of four airbags. It’s just a shame that ESP is only available as an expensive option – and it’s not offered at all on the eco-special i10 Blue model.