We plug in with electric city car 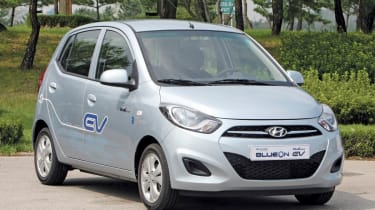 An impressive electric car, given that bosses have no plans to sell it yet. The i10 BlueOn has the very latest battery tech, and performs well. Hyundai wants to see cost savings and improvements in infrastructure, but is already committed to this – it’s spent £22m-plus getting the car this far.

Go green by going blue! Hyundai has joined the electric car party with its i10 BlueOn – and Auto Express has driven it.
Advertisement - Article continues below
It’s the first battery-powered model from the Korean firm, and features an 81bhp electric motor developing 210Nm of torque. This is fed by hi-tech 16.4 kWh lithium-ion polymer cells, which have been co-developed with electronics giant LG. The battery pack is 40 per cent smaller than one using nickel-metal hydride cells, and weighs 30 per cent less, so it doesn’t affect the i10’s passenger or boot space.
Thanks to Hyundai’s clever Virtual Engine Sound System, an artificial humming from start-up warns pedestrians that the car  is approaching. The auto-style gearlever allows you to select Drive, Eco-Drive and reduced power modes, which extend the range at the cost of performance. Regenerative braking is strong – you only need the lightest touch of the pedal to bring the car to a stop. And despite the weight the batteries add, the BlueOn feels quicker than the 13.1-second 0-62mph time suggests. Plus, it’s stable at speed, and while it isn’t as agile as the petrol i10 through corners, that impressive pace gives it lots of character.
Charging takes six hours from a household power supply, for  an 87-mile range. Yet while it appears production-ready, the firm doesn’t plan to sell a mass-market electric car until 2013.
Advertisement
Share this on TwitterShare this on FacebookEmail
Advertisement