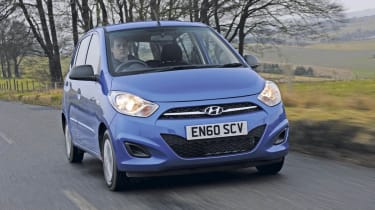 There isn’t much wrong with the standard i10 – and this could be the Blue model’s biggest sticking point. Its economy and efficiency differences aren’t great enough to make it the default choice, unless you live in London or are desperate to save £20 a year on road tax. Still, the technology works well, and the 1.0-litre engine is characterful. Like the rest of the range, the Blue is well equipped, spacious and fun to drive – and is backed up by Hyundai’s five-year warranty.

As well as revisions to the range, Hyundai has taken the opportunity to add an eco model to the line-up – the i10 Blue.
With CO2 emissions of  99g/km, the Hyundai is the most affordable five-seat car to hit the magic number, which means it’s exempt from road tax, as well as the London  congestion charge. It’s also  the first sub-100g/km car the firm has sold in the UK.
Video: watch CarBuyer's video review of the Hyundai i10
[[{"type":"media","view_mode":"content_narrow","fid":"69310","attributes":{"alt":"","class":"media-image"}}]]
It’s powered by an all-new 1.0-litre petrol engine, which replaces the previous entry-level 1.1-litre motor, and brings about improved performance and  efficiency. The Blue will cover 0-62mph in 14.8 seconds – a whole second quicker than the previous model – while economy is improved with a combined figure of 67.3mpg.

As well as the new engine, the Blue model also benefits from low rolling resistance tyres, an Eco Drive indicator which tells you the most  efficient time to change gear, and Hyundai’s ISG stop-start system. On the road, the 68bhp three-cylinder unit feels livelier than the figures suggest – thanks in part to the need to rev it hard, which is encouraged by the distinctive offbeat sound it makes. You need to change gear regularly to get the best out of it, but that’s made easy by the precise five-speed gearbox.
Like other i10s, the steering is consistent, although the low-rolling resistance tyres do have a little less grip. The stop-start system works well, too, as it fires up quickly, but the shift indicator can be optimistic when suggesting a gear while you’re trying to build up speed. Thanks to the smaller 13-inch wheels, the Blue model rides even better than regular i10 models, and is comfortable at most speeds.
Inside and out there are few changes to the Blue to mark it from other i10s, save for some BlueDrive badging on the doors and tailgate. What’s more, because it’s based on Classic trim, the Blue has decent standard kit, including air-con and an iPod connection, and of course the cabin is particularly spacious for the class.
And like the best eco  models, the i10 Blue pulls off the neat trick of feeling like  a regular i10, rather than a pared down green-machine.
Share this on TwitterShare this on FacebookEmail