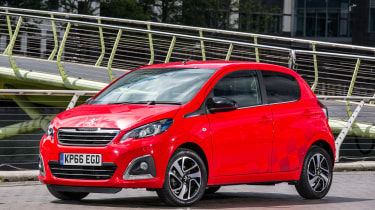 Things change very quickly in the city car class, with the bar constantly being raised when it comes to equipment levels, refinement and usability. As a result the 108 is starting to feel dated in some ways, but it can still make a fine used buy. If you avoid lower-spec cars you’ll also get plenty of kit. All 108s are free to tax if you buy one registered before 1 April 2017, and Top variants offer open-air fun with a healthy dose of style thrown in. Cheap to buy and run, the 108 won’t excite you, but it’s easy to drive and is perfect in town due to its compact size and decent ride.

Peugeot has been making cars for well over a century, offering models of all shapes and sizes during that time. But it’s the brand’s smaller models that have been the most desirable, with its 205 proving to be a landmark car.

When Peugeot/Citroen collaborated with Toyota to launch the 107, C1 and Aygo in 2005, it was clear that another fun and affordable car had been born.

Those models were such a hit that almost a decade after their introduction PSA and Toyota came up with an all-new car that didn’t have the cheeky charm of the original model, but was much more grown up in every way; and now you can get into a Mk2 for less than £5,000. 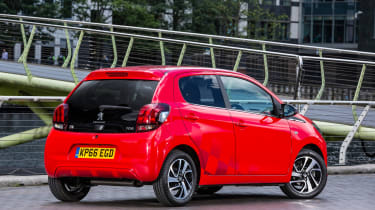 The second-generation 108 reached UK showrooms in July 2014. Buyers could choose between 68bhp 1.0 and 82bhp 1.2-litre three-cylinder petrol engines; there was no diesel option. Both came with a five-speed manual gearbox, but the 1.0-litre was offered with a semi-automatic transmission, called 2-Tronic.

There was a choice of three or five-door versions and either a regular hard-top hatch or one with an electric, folding cloth roof, called the 108 Top.

Roland Garros special editions were launched in May 2015, June 2016 and August 2017, plus a new range-topping GT-Line trim level was added in June 2016. A range refresh in May 2018 brought new colour options, but the only engine available was a 72bhp 1.0-litre.

One-litre cars are fine around town, but if you do any motorway driving the 1.2-litre unit offers extra zip without any real fuel economy penalty. The 2-Tronic box takes some mastering, but once you’ve done so you’ll probably love it. 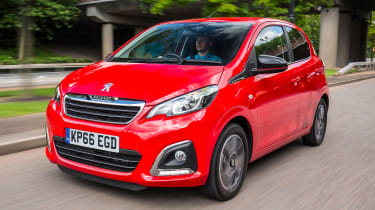 Alternatives to the Peugeot 108 Mk2

The competition is fierce in this class, with the Volkswagen up!, Skoda Citigo and SEAT Mii being convincing rivals. They feel grown up to drive, are refined and well made, plus there are lots about.

Korean duo the Kia Picanto and the Hyundai i10 are also very desirable thanks to their long warranties, excellent reliability and generous kit levels; they also feel surprisingly mature to drive.

The Renault Twingo and the Smart ForFour are in effect the same car. While they’re not class-leading, they look neat and are surprisingly practical thanks to a clever interior design. Don’t forget the Citroen C1 and Toyota Aygo, either; both are rebadged versions of the 108.

Some drivers struggle to link their phone to the 108; an update is needed on the phone.

If you want a 108 automatic you’ll have to buy a five-door car; three-door models are manual only.

The 108 notched up a four-star Euro NCAP rating, which is as good as any car in this class.

Some owners have reported problems with their engine turning over but not starting; a new battery is the solution to this. 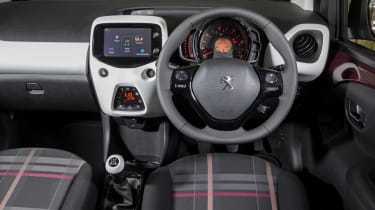 Inside, the 108 is very simple. Its steering wheel adjusts for rake only, and Access editions don’t get driver’s seat height adjustment; all front passenger seats are fixed. There’s space for just two in the rear and the backrest folds 50:50. When it’s down the boot can stow 780 litres or 196 litres with the seatbacks in place (180 litres with a spare wheel). 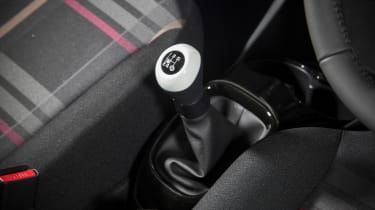 The 108 has had two recalls, but, unusually, the first, which was issued in January 2015, affected just one vehicle. Built on 14 November 2014, it had a faulty front bumper which could deform incorrectly in a crash.

A recall in June 2016 affected 985 cars built between 9 September and 15 October 2014. These had a steering column which could collapse, leading to a loss of control.

The 108 didn’t make it into our Driver Power 2018 survey, but it was in 48th place last year. By far the most impressive scores were for low running costs and economy, along with connectivity. Most of the other ratings were mid-table, but owners are less keen on the 108’s engine and gearbox, practicality and safety.