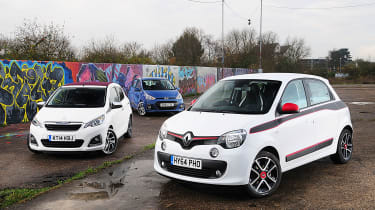 City cars have gone from strength to strength in the past 12 months. New models have been launched and ranges expanded to include engines for different needs. For this test, we’ve lined up three city cars that we’ve tried before, but this time with larger-capacity engines.

First up is the new Renault Twingo. We've already tested the city car with a 69bhp naturally aspirated engine, but it came up short against the SEAT Mii. This time around, it’s the 89bhp turbo model’s turn – can it succeed where the less powerful Twingo failed?

The Renault will need to be good to take on the 1.2-litre Peugeot 108. Apart from a bigger engine, the 108 is largely the same as the Toyota Aygo, which has previously been defeated by the Skoda Citigo. Peugeot will want to deliver a knock-out blow to arch rival Renault.

The Hyundai i10 is the sensible choice here. But does 1.2-litre four-cylinder power make it worth the extra outlay over the 1.0 three-cylinder car? We drove all three models on a variety of roads to find our urban champion.

Read full individual reviews by clicking the links above, and scroll down to find out which city car came out on top... 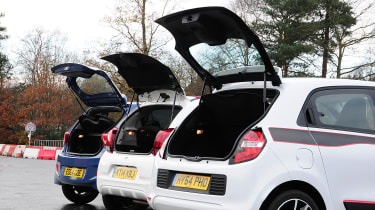 The Hyundai wins the space race here thanks to its larger dimensions. There’s 252 litres on offer, compared to a maximum of 219 litres in the Renault. Both the Twingo and 108 show their cost-cutting roots via their one-piece glass tailgates. They also feature 50:50 folding seats. In contrast, the i10 gets a proper steel bootlid with a window, and its rear bench has an offset fold, although it’s not quite 60:40.

If you can’t afford to upgrade to the £600 R-Link touchscreen infotainment system, the Twingo’s phone cradle is a budget option. It allows you to clamp your phone on the dash, so you can use it like a touchscreen when you’re on the move, although it does get in the way of the stereo controls. 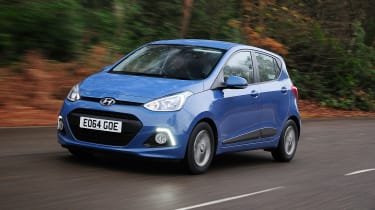 It’s close, but the i10 wins, thanks to the fact it has plenty of space, decent kit and a grown-up driving experience, all at a price that undercuts its rivals here by a significant margin. However, the 1.2-litre isn’t the engine we’d go for – compared to the three-cylinder i10, it’s thirsty and doesn’t have much more performance. We’d save another £500 and go for the 1.0-litre instead. 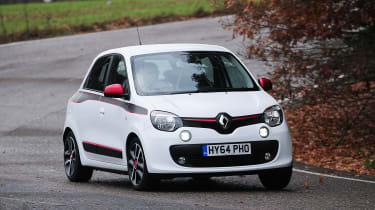 Turbo power does wonders for the Twingo. Don’t expect searing performance, but the TCe powerplant is rapid enough, and it returns excellent economy, which adds to the appeal. We’d recommend adding the Sport pack, too, because it gives the car a sporty edge. That does bump the price up, though, while the quality of the interior falls behind its cheaper rivals. 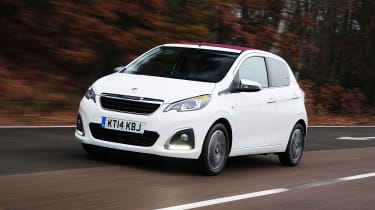 The 108 can hold its head high in this company. It’s a stylish city car with personalisation options that would offer something for most buyers. The 1.2-litre engine delivers punchy performance around town, but it has plenty of vibration, too. Combine that with the cramped cabin and poorer motorway manners, and unfortunately the Peugeot finishes in third place.