Special edition Renault Twingo The Color Run gets plenty of kit, but is let down by its underpowered 1.0-litre petrol engine 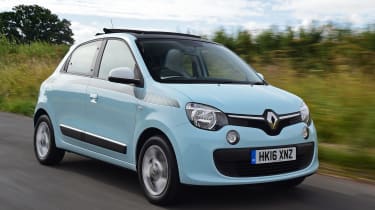 Renault’s Twingo The Color Run Special Edition is a good buy: it’s got plenty of kit, looks great and, crucially for some, sits in a low insurance group. It’s practical too, with space for four - but watch out for hills as the 1.0-litre engine feels underpowered. A Skoda Citigo is still a better choice for most too.

Renault’s cute and practical Twingo city car range has been updated to include this new The Color Run Special Edition. It’s based on the Play specification, but gets a host of extra kit for a relatively small bump in price. Is it worth it?

This new limited edition model ties in with the ‘Color Run’ event happening throughout Britain this summer, where entrants are pelted with coloured powder as they run. As a result, the Twingo gets Color Run badging and lots of vibrant personalisation options as standard. 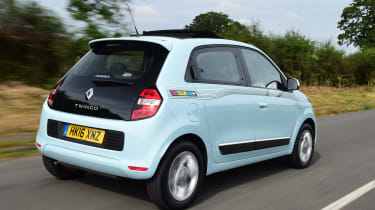 Our car featured a blue exterior finish, matched to an interior style pack that changes the upholstery, door cards and part of the centre console. There’s a set of stripes down the side of the car too. All together it looks great, and if style is your thing then this special Twingo will be worth the cost over the Play model from the standard range.

Also included are 15-inch alloys, a fabric folding sunroof, air-conditioning, DAB radio, Bluetooth and USB connectivity. There’s no central screen, but you can download an app for your phone that displays sat-nav, internet radio and even a rev counter. If you’ve got a capable smartphone this could be just as useful as a built-in screen.

So this Color Run version looks like good value at £10,495 - but, like any model in the Twingo range, it’s overshadowed by the excellent Skoda Citigo and Hyundai i10. Both of those cars are cheap to buy as well, but both are better to drive.

This Twingo is only available with the 1.0-litre naturally-aspirated engine, which is both slower and less economical than the 900cc turbo unit found in higher-spec Twingos. It feels underpowered, much more so than the lower-powered 1.0-litre in the Citigo, and isn’t particularly characterful either. 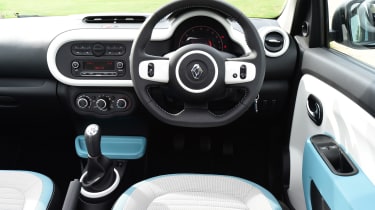 Despite being rear-wheel drive and very light (865kg) the Twingo isn’t as fun to drive as the Citigo or i10, with light steering that lacks feel. It doesn’t turn in as sharply as its rivals either. That’s not to say it’s not amusing to dart about in, with its brilliantly tight turning circle, but it can’t match its front-wheel drive rivals for fun.

It is quite practical, with the rear seats being surprisingly accommodating for such a small car. The 219-litre boot is a decent size considering that there’s an engine underneath it and the seats fold down to free up 980 litres in total. Some insulation means it doesn’t get too hot back there either.

A four-year warranty, a placing in insurance group 3 and cheap yearly road tax will mean the Twingo Color Run will be reasonably cheap to run, but this engine’s 56.5mpg economy is a bit disappointing.