The Renault Twingo GT is nippy rather than fast, and isn't as much fun to drive as its rivals 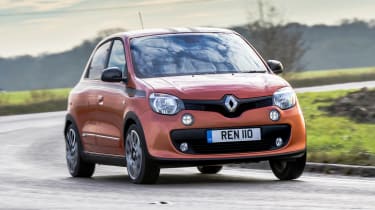 The Renault Twingo GT is nippy in town, looks great and has plenty of kit, but sadly it’s disappointing to drive, without the agility we’d expect of a warmed-up Renault. It’s not a proper Renaultsport model, and the small tweaks aren’t enough to elevate the Twingo above the VW up! and Skoda Citigo as a fun-to-drive city car – especially as it’s quite a bit more expensive to buy than either of its rivals.

With its stylish looks and rear-engine, rear-wheel drive powertrain, the dinky Renault Twingo has long been crying out for a souped-up Renaultsport variant. While the GT driven here is the closest we’ll get, the new model features plenty of sporty tweaks and even some extra power too.

Renaultsport boss Patrice Ratti told us that there couldn’t ever be a true Twingo RS, as the little 898cc engine can’t be reliably tuned to offer more than the 109bhp it gets in this GT model. With the 0-62mph sprint taking 9.6 seconds, the GT feels nippy rather than fast. A mid-range hit of torque means it’s much better at higher speeds than lower-powered models, though. 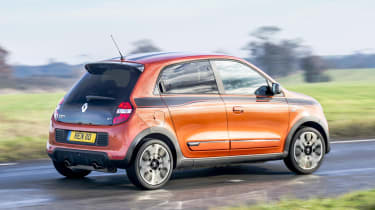 On a twisty road, the Twingo GT is more fun to drive than standard versions, but even a cheaper and lower-powered Skoda Citigo or VW up! is more fun in the corners. The Twingo’s steering is too vague and the eager traction control means you often feel it cutting the power as you come out of a bend. The engine isn’t as fun to rev as the 1.0-litre unit in its rivals, nor does it ride as well - though it’s not too uncomfortable to live with day-to-day.

In town, the Twingo GT is at its best. It’s happy to dart through traffic and the incredibly tight turning circle present on all Twingos means it’s really easy to park. Plus, the thrummy engine sounds best in the middle of the rev range, so nipping up and down between traffic lights is fun.

Where the GT comes out on top is in the style department. The big alloy wheels, twin exhaust pipes and sporty-looking decals are cool, but our favourite touch is the vent above the rear wheels that hints at Renault’s previous motorsport legends.

The interior is great too, with a nicely-designed dashboard and splashes of colour all around the cabin. It’s well equipped, with climate control, auto lights and wipers and cruise control all coming as standard. 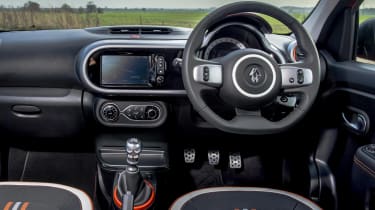 However, at £13,755 the Twingo GT does look rather expensive. It’s designed to be more of a driver-focused car than the standard Twingo models, but the improvements are small and can’t lift it above the Skoda Citigo for driving fun.

Plus, if you feel the Citigo is a little underpowered there’s also the new VW up! TSI, which features a turbocharged 1.0-litre engine with 89bhp and races from 0-62mph just three tenths of a second slower than the Twingo GT. There’s even a VW up! GTI on the way with 114bhp, though you’ll have to wait until 2018 to buy one.