Smart fancies its ForFour as king of the urban jungle, but the SEAT Mii and Renault Twingo stand in its way 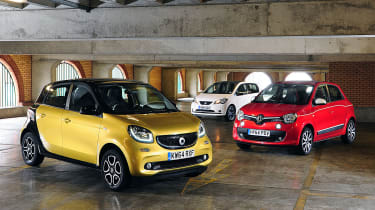 Smart has just launched an all-new ForTwo city car, but perhaps more significantly, the German brand has also revived the five-door ForFour to compete in this competitive class.

As with the 2005 original, the four-seater shares its styling with its two-seater stablemate, while under the skin, the rear-engine, rear-wheel-drive platform is carried over, too. 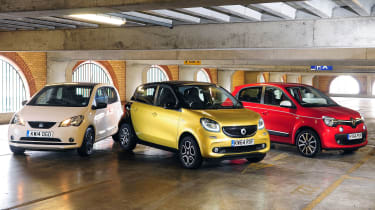 In fact, the ForFour’s running gear is shared with the cheaper Renault Twingo. So, for its first test, we’ve lined the Smart up against its French cousin to see how it compares.

However, both of them will need to excel if they’re going to beat one of our favourite city cars, the SEAT Mii. The Spanish model, along with the Skoda Citigo and VW up!, redefined the class at launch nearly four years ago, while the special edition Mii by Mango has an upmarket, fashion-inspired edge, yet still manages to undercut the ForFour on price.

So, can the ForFour shine against its rivals, or will it be outsmarted by the competition?

Follow the links above to read individual reviews, and scroll down to see which city slicker comes out on top in this test... 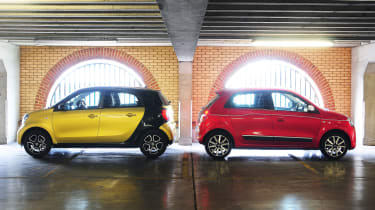 The Smart and Renault share the same platform and look similar, but the brands quote different dimensions for their cars. The ForFour is shorter, wider and taller, albeit by millimetres, and the differences translate into a smaller boot. It boasts a 185-litre capacity, while the Twingo offers 188 litres. Both cars have two-stage seatbacks, so you can position them at an upright angle to create a little more boot space. 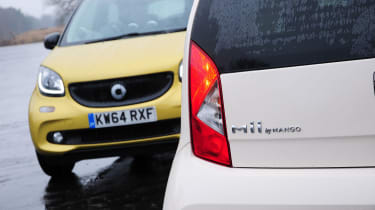 Smart has already started the ball rolling with ForFour specials by offering the Edition 1 at launch. This high-spec model adds new wheels, extra kit and unique body colours. The Mii by Mango is a special edition in name, although SEAT hasn’t put a limit on the car’s production numbers.

Both the Smart and Renault are available with a 1.0-litre turbo three-cylinder engine. Producing 89bhp and 135Nm of torque, the unit lowers the ForFour’s claimed 0-62mph time from 15.9 seconds to 11.9 seconds, while the lighter Renault completes the benchmark sprint in 10.8 seconds. 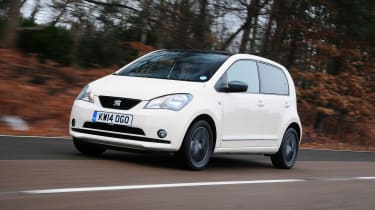 The brilliant Mii takes another road test victory. While it’s not as boldly engineered as its rivals here, it’s a more complete all-round package. Not only is it nippy and agile around town, but it tackles longer journeys with the sort of composure you’d expect from a much larger car. It’s also well equipped, cheap to run, spacious and impressively refined. 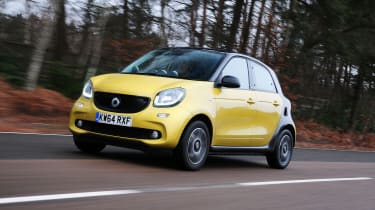 It’s a close call between the ForFour and Twingo for second place, but the Smart just gets the nod. There’s little to choose between the pair when it comes to driving and practicality, but the Smart should make a slightly smaller impact on your wallet. Its higher list price is offset by much stronger residuals, plus it delivered stronger economy. It’s also better equipped and classier inside. 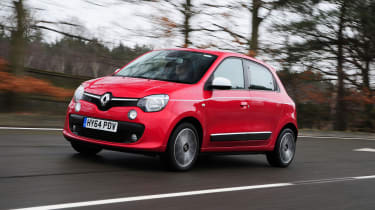 There’s no denying that the Twingo has plenty of showroom appeal. It’s cheap to buy and boasts a roomy interior with a decent haul of standard kit. However, like the ForFour, it’s undermined by leisurely performance, plus it can’t match the Mii for comfort and composure. The Twingo is still a characterful city car, but it lacks the depth of ability of the class leaders.