Smart’s ForFour blends city car running costs with added practicality – but is it worth its premium price tag? 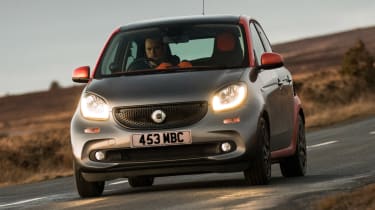 With two more doors than its baby brother, the ForTwo, the Smart ForFour city car adds even more practicality to the tight-turning Smart family. The extra size and weight mean the turbocharged engine is the one to go for – especially if you’ll be doing longer journeys. But sharing its mechanicals with the Renault Twingo, the ForFour doesn’t quite have the same character, and it’s not as good to drive as the Skoda Citigo.

Going up against the Hyundai i10 and Skoda Citigo – our favourite urban runabout – the new, 2015 Smart ForFour faces a tough challenge. In the hotly contested five-door city car sector price is a big factor, and with the entry-level model starting at £11,620, it’s a sizeable chunk more than the sub-£10,000 base-spec Hyundai and Skoda. So does the ForFour offer something the others don’t? We tried it on UK roads for the first time to find out.

Smart’s original ForTwo city car was famous for being able to park nose on to the kerb, and while this all-new ForFour can’t quite manage the same trick, its incredibly tight 8.65-metre turning circle means the larger, four-seat Smart is highly manoeuvrable. 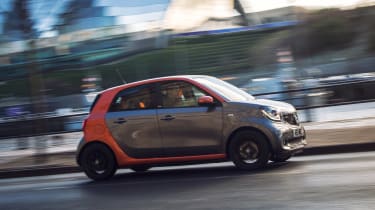 It’s the tightest turning circle in its class, in fact, and with light steering and good all-round visibility, it makes city driving, zipping through congested streets and parking simple. An optional rear-view camera and parking sensors help manoeuvrability further, and although the ForFour is 80cm longer than the ForTwo, it still feels compact on the road.

The ride is supple and composed, with the suspension absorbing urban obstacles such as manhole covers and potholes with ease. However, the Smart loses its controlled edge on faster, more open roads.

Although the steering is quick, it doesn’t feel quite as agile at higher speed as its rivals. Don’t be fooled by the rear-engined, rear-wheel drive layout, either – the ForFour has been designed to handle like a front-wheel drive car and isn’t particularly sporty. 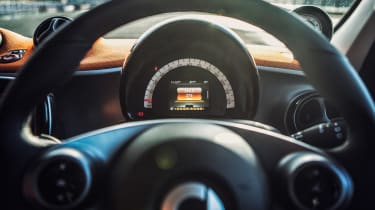 You sit high up and there’s a noticeable amount body roll in corners, and while the 70bhp 1.0-litre three-cylinder non-turbo petrol engine we tested feels punchy and willing around town, it too lacks when you take the Smart out of its comfort zone.

Engine choice also includes an 89bhp 0.9-litre turbocharged petrol – if you’re going to be doing longer journeys this higher-power engine is the one to go for. There’s enough performance from the less powerful 1.0-litre unit to cruise along with motorway traffic, but you’ll have to change down a gear for an overtake, planning it wisely. The engine is noisy when revved hard, too.

It’s still more refined than the Renault Twingo with which the ForFour shares its chassis and engine, thanks to the Smart’s extra soundproofing over the Renault, but it lacks the French car’s character. 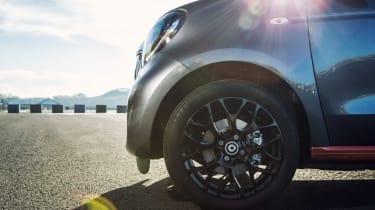 Next to the ForTwo, the extra pair of doors makes the Smart look a touch awkward, but they bring with them more usability. They’re only small, but open wide so it’s easy for even tall adults to climb into the rear. There’s not much room when you’re back there, but the cabin feels light and airy thanks to our Prime spec test car’s standard panoramic roof, even if the budget interior plastics are hard and brittle-feeling.

Given the engine’s location boot space is still acceptable at 185 litres, rising to an impressive 975 litres when the flat-folding rear seats are stowed away, and there are some clever storage solutions inside the Smart, too.

On the subject of practicality, the ForFour should be relatively safe, with ESP, a clever Crosswind assist system (useful, given the Smart’s slabby sides and narrowness), lane keep assist and a collision warning device on offer. Like the original Smart ForTwo, this latest ForFour model also boasts a ‘Tridion’ safety cell. Euro NCAP gave the car a four-star rating, the same as the i10. 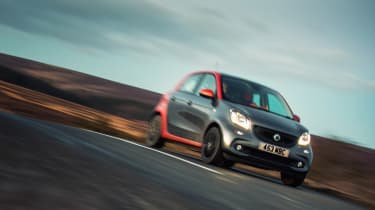 If you want any more equipment, you’ll have to pay for it on top of the already relatively steep list price, but expensive options aside, the Smart should be cheap to run with official fuel economy of 67.3mpg combined and CO2 emissions of 97g/km meaning free road tax.

While the ForFour’s clever layout brings a big benefit in terms of manoeuvrability, it does come at a price. Add to that the Smart’s rivals offer more space and greater all-round ability and the ForFour’s appeal seems limited.