We hit the road in the updated Smart EQ ForFour, which takes the fight to the VW e-up! and Skoda Citigo-e iV with 81 miles of range 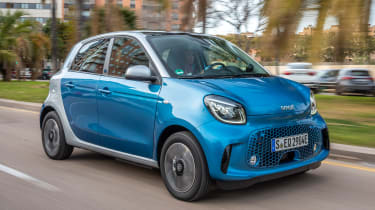 While previous Smarts were often criticised for high list prices, the Smart EQ ForFour is competitive with all electric city cars from the Volkswagen Group. It also feels more charming yet substantial inside, and is more manoeuvrable, too. However, it’s hampered by a range which, for some, won’t be adequate. Still, based purely as an urban runaround, its low running costs mean that it’s worth a look.

This is the Smart EQ ForFour. Once the government’s £3,500 plug-in car grant is taken into account, it’s priced from £17,285, placing the ForFour right into the ballpark of the VW Group electric city car trio of the SEAT Mii electric, the Skoda Citigo-e iV and the Volkswagen e-up!.

It’s an update to the range (the smaller ForTwo Coupe and ForTwo Cabriolet get similar revisions) following two big changes for the brand: first, the move to drop combustion engines completely in order to operate as a fully-electric manufacturer; and second, since Chinese giant Geely took a 50 per cent stake in the company to form a joint venture with Mercedes.

While the name is new, the updates to the EQ ForFour focus mostly on the cosmetic. From the outside, the ForFour gets a sleeker bonnet, larger air dam and some refreshed tail lights, while new wheel designs and colours also feature. The cabin feels a step up in quality over most city car rivals, and for 2020 there’s a couple of extra cup holders and a smartphone tray. What hasn’t changed, however, is the infotainment system: a rather clunky, slow Renault-based set-up which lacks Apple CarPlay. 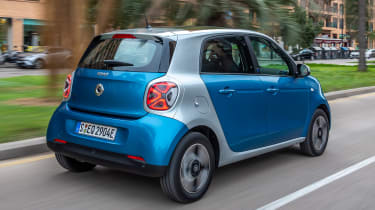 Access to the cabin is reasonably easy thanks to doors that open extremely wide, but there’s only so much that can be done to offer space to passengers once inside a car that measures less than 3.5 metres long. The boot is a rather miniscule 185 litres too - a result of the location of the electric motor.

Under the skin, the EQ ForFour carries on with the same rear-mounted 80bhp motor driving the back wheels. A 12.7-second 0-62mph time is a couple of tenths down on the VW Group city cars - not a staggering number on paper, but at town speeds, the ForTwo feels lively. A peak torque of 160Nm is instantly available, and it helps the Smart step skip around with a puppy-like enthusiasm. It’s so manoeuvrable, too; the tiny turning circle and narrow body makes fighting through crowded streets a cinch.

Only a generated hum from pedestrians disturbs the low-speed peace, though the ride comfort isn’t quite on par with a Hyundai i10. With the battery pack mounted low within the chassis, the EQ feels more stable through the turns than the now-discontinued petrol model, but the likes of the i10 and the Up still handle more sweetly.

However, for some buyers, the biggest issue with the Smart EQ will be range. A 17kWh battery means that, based on the official WLTP testing figures, it’ll cover around 81 miles between charging. That number is almost precisely half that of the Skoda Citigo-e IV. Fine for a commuter car, but impractical for anyone who might want to venture out of the city. 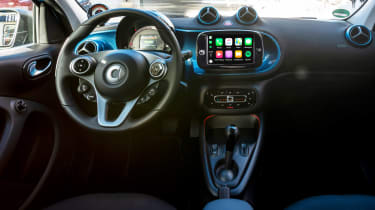 A 22kW on-board charger is fitted as standard, which means that topping up the battery from 10 to 80 per cent takes as little as forty minutes.

The ForFour comes in a choice of three trim levels. The entry level Passion Advanced has pretty much all the kit that any city car buyer really needs: 15-inch alloy wheels, cruise control, climate control, and parking sensors are all included as standard.

Should you wish to venture higher up the range, however, an extra £1,150 step up to the Pulse Premium includes 16-inch alloy wheels, a pair of sunroofs and a reversing camera. The top spec Prime Exclusive adds LED head and tail lights, fog lights with a cornering function, rain-sensing wipers and ambient interior lighting. Including the government grant, the Prime costs £19,585.