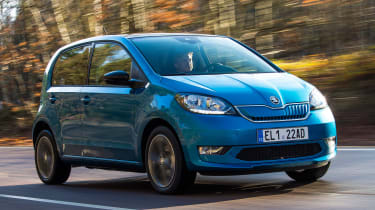 If you’re in the market for an urban tool with minuscule running costs, and you don’t regularly need to carry more than a couple of small passengers, then the Citigo-e iV might just be the perfect choice. We’d urge you, though, to check your own usage profile first to see not only if an EV is right for you at all but also if you’re going to need much charging beyond what you can do on your own driveway. If you’re not then the cheaper version of the Skoda, without rapid charging, looks an even more appealing proposition.

There’s no shortage of electric offerings on the way - including three plug-in city cars from across the VW Group. We’ve already tried the VW e-up!, SEAT Mii Electric and Skoda Citigo-e iV abroad, but now we’ve had a chance to drive the Czech model on British roads – in the murky chill of a UK winter – to see how it stacks up.

To recap, the three models are as similar in electric form as they have been for the past eight years fitted with a petrol engine. There’s a single mechanical set-up: an 82bhp electric motor with a 36.8kWh battery that can deliver around 161 miles of range on a single charge. Even the pricing isn’t too different, with spec-for-spec models all costing between £19,315 and around £20,000 after the government plug-in car grant.

However, Skoda has gone its own way by offering a second, cheaper edition of the Citigo-e iV with a few fewer toys and, significantly for some, only conventional charging instead of the rapid DC CCS configuration that’s standard on all the other models. It’ll save you almost £2,500 over the regular model that we’re testing here, and for some people, who intend to drive their car around town with only domestic plug-ins most of the time, that will make it an astonishingly effective urban option. 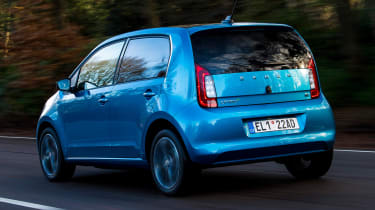 Indeed, on paper at least, that basic edition looks even more appealing than the pricier model we’re driving here. Our car gets a few extra trinkets – heated seats and rear parking sensors, plus ambient lighting and body-coloured door mirrors – but nothing that you might consider essential.

In any case, the rest of the package is very impressive. The Citigo-e iV has more than enough pep to keep up with urban traffic, helped not by outright grunt but rather the instant torque deliver of the electric motor. And when you’re moved beyond traffic lights and junctions to motorways and slip roads, there’s enough there for you to maintain comfortable progress – even when you get close to the car’s 81mph top speed.

The mechanical refinement is pretty decent too, although in some ways the reduction in noise compared with a combustion engine exposes other areas of what is demonstrably an £11,000 car the rest of the time. So you’ll hear more road and wind noise than you might be used to, and in really slow-moving traffic you can actually hear the odd electrical click coming from the AC motor as it nudges you forwards. On the whole, though, this is still a very refined car around town.

Of course, the battery-powered Citigo weighs a fair chunk more than the petrol-powered one – and this does make the car feel a little more leaden over bumps and broken UK roads. It’s by no means unbearable – indeed, if you hadn’t driven a petrol Citigo you’d probably still think it comfortable enough - but there’s a slightly increased tendency to thunk into larger road imperfections. It’s still happy to change direction, though, with direct steering that helps you to dart in and out of traffic and narrow streets.

Inside, you get a natty bit of new trim across the Citigo’s dashboard to showcase that you’re driving an electric car and some green stitching here and there - and of course, there’s an automatic gear selector between the front seats instead of a manual shifter. It’s simple enough to use and includes extra settlings to vary the amount of brake energy recuperation. Go for the most aggressive setting and you can pretty much drive on one pedal.

The infotainment option is another leveller between the two versions of Citigo-e – but that’s a little bit of a disappointment. It is, as with the Mii and up!, a simple radio with Bluetooth connectivity, and then a USB socket on the top of the dashboard right behind a universal smartphone mount. The idea is that you plug in your phone and use its screen to run Skoda’s own app, Android Auto or Apple mapping, instead of a car display. 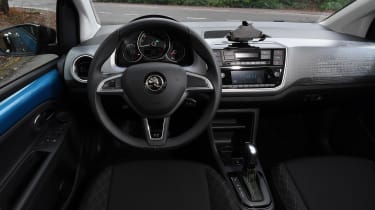 In practice, though, it’s still a little fiddly to use your smartphone, even on something a six-inch screen. We’d rather this option were left to the basic edition, with a proper infotainment display from the VW Group parts bin on the higher-end model. But then, that would probably nudge the price up even higher - and it would also require a fresh dashboard design – something that Skoda, SEAT and VW seem reluctant to invest in at this stage in the models’ lives.

And of course, one thing the Citigo cannot do is really compete with the likes of the new Peugeot e-208 and the latest Renault ZOE on cabin space and practicality. The boot is fine by city car standards but easily filled by a few big shopping bags, and while you can go four up, rear-seat passengers won’t thank you for a long journey.

Speaking of which, freezing UK temperatures did knock the edge off the Citigo-e iV’s WLTP range calculations. Our mileage contained everything from urban crawls to 70mph motorway runs, though, and we found you could depend on 120 miles of range between charges. Those using the Citigo-e iV for suburban use – and harnessing every scrap of brake energy going – should get 140 miles in winter, and north of 150 miles in warmer conditions.

Charging your electric Skoda will take around 16 hours using a standard domestic plug. Go for the pricer model, or upgraded the basic car with the optional quick-charge hardware and you can reduce that to four hours 15 minutes using a 7kW home wallbox, or one hour via a 40kW charger.