Can Ford’s new Ka+ go straight in at number one in the small car class? We find out as it faces two tough rivals 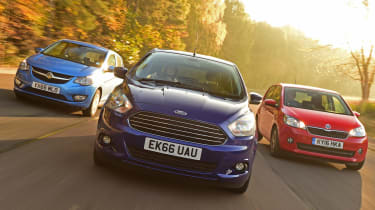 Downsizing is all the rage, but Ford is bucking the trend with its latest city car. Bigger and more spacious than the model it replaces, the aptly named Ka+ aims to offer all the benefits of its compact predecessor, but with the practicality to rival models from the class above.

Designed and developed for South American and Asian markets, the Fiesta-based newcomer has been overhauled for more demanding European buyers. That means it promises to be good to drive, solidly built and well equipped. Yet despite an increase in size and refinement, it costs no more to buy than the original Ka.

So has Ford done enough to go straight to the top of the class? To find out, we’ve pitched it against two formidable rivals in the form of the Skoda Citigo and Vauxhall Viva. The former is our reigning champ, combining compact dimensions and penny-pinching running costs with refinement.

The Vauxhall isn’t quite as accomplished on the road, but its bargain-basement price, generous kit count and hi-tech additions make it a tough opponent. So which of these tiny tots carries off the big prize? 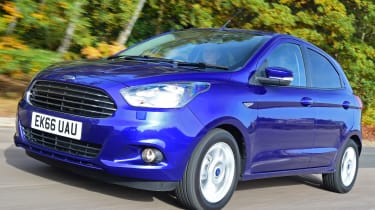 The Ka has been the entry point to Ford ownership since the original made its debut in 1996. This latest, third-generation model is called the Ka+ and has grown in size, plus it’s also available as a five-door for the first time. Built in both Brazil and India, the newcomer is offered in Studio and Zetec trims and with a single 1.2-litre petrol engine in either 69bhp or 84bhp guise. Here we test the flagship £10,295 1.2 85 Zetec.

Tester's notes: The UK only gets the 1.2-litre four-cylinder tested here, but a wider variety of engines is available worldwide. Ford’s PowerShift twin-clutch gearbox is also offered. 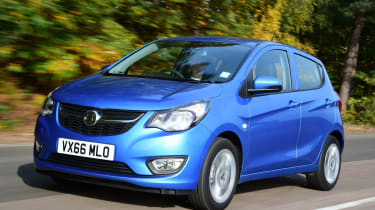 At £9,865, the flagship Vauxhall Viva SL offers lots of kit for the money. It’s designed to sit under the stylish two-door Adam and the larger Corsa supermini, but hi-tech upgrades and grown-up dynamics make it a match for its rivals here. We test the 1.0-litre SL model, although the car in our pictures is the SE spec.

Tester's notes: The Viva comes with a City Mode, which  delivers more assistance to the steering for parking manoeuvres. But the control is already so light that you’ll never need this. 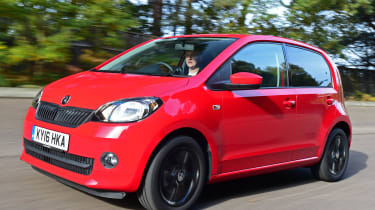 The Skoda Citigo has proven to be a small car phenomenon. Not only has it scored numerous road test victories, it scooped the City Car crown in the past five Auto Express New Car Awards.

There’s a choice of three or five-door bodystyles, five trims and a 1.0-litre engine in two states of tune. Here we test the flagship £10,865 SE L 1.0 75 GreenTech five-door – although the car pictured is a Colour Edition.

Tester's notes: The brilliantly packaged and executed Skoda feels far more grown-up and refined than its dinky dimensions and bargain price suggest. Only flaw is the pop-out rear windows. 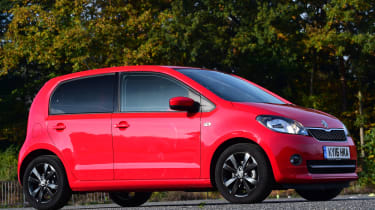 The Citigo’s winning margin has been reduced, but if you’re looking for a cheap, practical and fun runaround, it still takes the crown. What’s more, it’s just as impressive when you leave the city behind and head for the open road. Better still, a mildly facelifted model is just around the corner, so there’s room to haggle on the price and the already tempting finance deals. 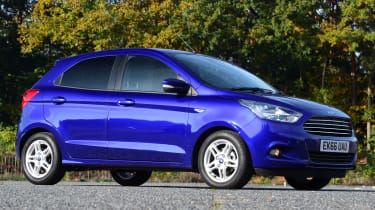 If you’re after supermini space on a city car budget, then the roomy Ka+ deserves serious consideration. It has the best ride and handling in the class, thanks to its Fiesta underpinnings. Zetec trim also comes loaded with kit, while Ford's Options finance makes it surprisingly affordable. However, it's let down by a dated interior, high running costs and awkward looks. 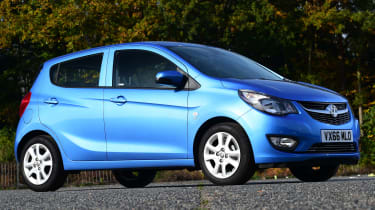 Smart styling, generous kit and low running costs count in the Viva’s favour, plus its standard OnStar service and optional IntelliLink touchscreen infotainment system are light years ahead of its rivals’ set-ups. Yet while the Viva is easy to drive and park, it lacks the dynamic polish of its rivals here and it feels out of its depth away from the city. It also has the smallest cabin and boot. 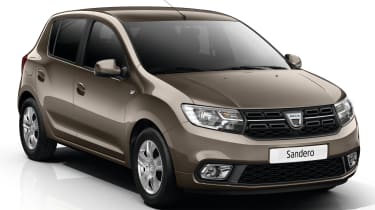 Like the Ka+, the facelifted Sandero aims to deliver supermini space for city car money. Tweaked looks give the Dacia a less bargain basement feel, plus there’s a new three-cylinder petrol engine.