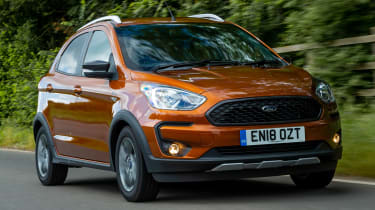 The Active keeps all of the strengths of the regular Ka+, as well as many of the weaknesses. We rate the fun handling, roomy cabin and the competitive price, but the dated interior design and patchy build quality could be improved. The new engine is a welcome improvement, as is the introduction of the firm's SYNC 3 infotainment system. From a practical sense, there aren’t many reasons to recommend the Active over the regular Zetec model, but it does add something that’s severely lacking from that very car: character.

This is the Ford Ka+ Active: the Blue Oval’s smallest car with desires to be an SUV. It joins the range as part of a mid-life refresh for the full Ka+ range and sits at the top of three trim levels.

As with Ford’s other Active models, the jacked-up Ka+ comes with a tougher 4x4-inspired stance and matching body kit. There is a diesel option, but Ford reckons that only four per cent of buyers will choose it – with the majority favouring this new 1.2-litre petrol instead.

It’s priced from £12,950 (£1,150 more than the Zetec), with the changes limited largely to a set of fairly extensive cosmetic changes. There’s extra body trim finished in black plastic around the arches, and some faux-skid plates on the front and rear bumpers, as well as a pair of roof rails, rear privacy glass and a unique set of 15-inch alloy wheels. There’s also a new colour, Canyon Orange, that’s exclusive to the Active. They’re only small changes, but they help to make what is normally a rather dreary looking car look more charming.

Perhaps the most significant difference comes with the suspension, though. The Active’s ride height is 23mm taller than the other models in the range, and it gets a thicker front anti-roll bar to compensate for the potential of any extra lean through the corners.

That minimal extra height is never going to endow the Ka+ with the lofty driving position you’d expect from a full-blown SUV, but the extra suspension travel – and the suppleness that comes with it – means that it’s the pick of the range for broken city streets. Better still, it keeps its cheery character from behind the wheel; it turns into bends with real enthusiasm, while compact dimensions, decent visibility and precise steering make it ideal for tight manoeuvres at low speeds.

The new 1.2-litre three-cylinder petrol is a definite improvement over the old 4cyl unit, but still not perfect. It’s 10 per cent torquier at low revs, and although power delivery is smooth enough, the lack of a turbo means that it’s still harder work than in some rival units. Like with most three-cylinder motors, it makes an audible thrum, but it’s never unpleasant. 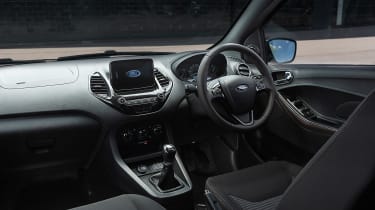 Ford also claims a four per cent improvement in fuel efficiency, helped partly by a start/stop system that’s now standard throughout the Ka+ line-up. If there's a downside, it’s that it uses the same five-speed manual gearbox as before. It’s precise enough, but has a grainy feel to the shift, which means it's not very satisfying to use.

In terms of size, the Ka+ is somewhere between a city car and a supermini, though in terms of interior space it’s closer to the latter. The high body gives great headroom, and fairly tall adults can get comfy in the back, though the rear bench is a bit narrow for three. The 270-litre boot is only slightly smaller than the Fiesta’s.

Interior quality isn’t a match for its big brother though. The design shares more in common with the previous-generation Fiesta, and as a result is looking more than a little dated. There’s plenty of hard plastics – not unusual for a city car – but things like the comically wobbly front centre armrest are harder to excuse.

The updates to the full Ka+ range has introduced Ford’s latest Sync 3 infotainment system. Standard on the Zetec and the Active, it’s a welcome addition, featuring both Apple CarPlay and Android Auto mobile phone connectivity. The mid-life updates to the Ka+ mean that a heated windscreen is now available for the first time (a £300 option with heated front seats).