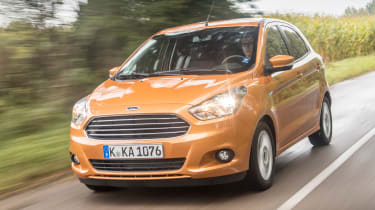 While it might not be the most stylish small car, the Ford Ka+ counters this with impressive practicality. Even more impressive is the way it rides with composure and refinement, and steers with the precision we’ve come to expect from even regular range Fords. Quality is good for the price, too, but while the engine is acceptable, it’s also the obvious weak point in the package.

When Ford’s funky-looking Ka emerged in the mid nineties it revolutionised the city car sector, with fun handling and striking design at an affordable price. But the market moved on, and the second-generation Ka never reached the highs of the original.

So now Ford’s repositioned its famous nameplate to follow those market trends. The Blue Oval’s European Boss Jim Farley told us Ford is “replacing the Ka with the Ka+ as the B-car value segment is exploding.” So with prices starting from £8,995 and with dimensions similar to the current Ford Fiesta, the Ka+ offers even more space and five-door practicality for not much cash.

It’s a full five-seater, is 40mm shorter than the Fiesta but stands 29mm taller, which gives it its versatile shape. While it might not be the most stylish hatch, it’s difficult to argue with the 270-litre boot including 13 litres of underfloor space, in the Ka+. The car also has 21 different storage locations, which Ford is particularly proud of. Drop the rear seats and there’s a healthy 849 litres on offer. 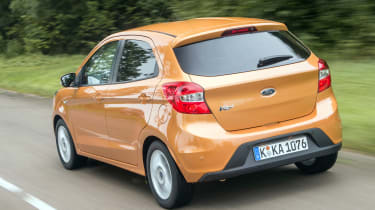 Despite its compact dimensions the Ka+ is roomy inside, with good head and legroom. This is thanks in part to the higher, more upright seating position made possible by the taller roof, which adds extra legroom in the rear. But there’s more to like than just the Ford’s versatility.

The Ka+ is based on the brand’s ‘global B’ small car platform, which underpins the Fiesta, too. That’s a brilliant car to drive, and the DNA is clear to see in the Ka+. However, Ford has gone to great lengths in turning this city car/supermini cross into a more refined vehicle for Europe.

The Ka+ is built in India, as Ford is targeting rapidly growing markets hungry for car ownership. However, we know that this formula doesn’t exactly translate to the UK from the brand’s lacklustre EcoSport compact crossover – and it seems like Ford has taken note, too. 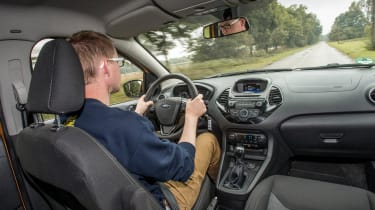 And it shows on the move, as the Ka+ rides and handles with the quality we’ve come to expect from small Fords. Admittedly, we drove it on smooth German roads but it rounded the harsh edges off the bumps we did find with finesse, while both the steering and chassis setup make it a sweet drive.

There aren’t many cars at this price that boast the compliant ride and refinement of the Ka+, and the lack of road and wind noise is impressive. The Dacia Sandero or Vauxhall Viva don’t match up. Extra soundproofing has cut down engine noise, too.

There isn’t a clever downsized turbo unit under the bonnet. Instead, The Ka+ is powered by a conventional 1.2-litre petrol with either 69bhp or 84bhp, which is mated to a Ford’s sweet five-speed manual. Variable valve timing on the inlet and exhaust camshafts helps the car return a claimed 56.5mpg and 114g/km CO2 for both versions. While this isn’t as efficient as some rivals, it’s acceptable.

The performance isn’t quite as good. The engine is derived from the 1.25-litre unit in the Fiesta, and the 84bhp version we tried didn’t rev nearly as sweetly. It’s been tuned for smooth mid-range performance with 112Nm of torque available, so despite being naturally aspirated, it feels flexible enough. 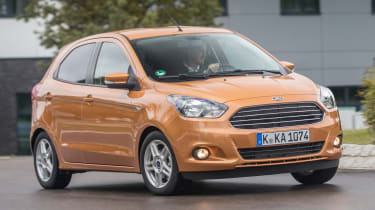 The 0-62mph sprint takes 13.3 seconds, but the unit feels strained when you rev it and the performance is only adequate at best. Instead, it’s better to focus on the car’s grown-up, relaxed gait and value for money.

It’s available in two trim levels: Studio, which starts at £8,995, and Zetec, which costs £1,000 more. The former gets electric front windows, air con, Bluetooth and a system called MyFord Dock, which clamps your smartphone to the top of the dash.

Zetec (expected to be the most popular with a predicted 80 per cent of sales) adds 15-inch alloys, DAB, Ford’s SYNC system and AppLink for improved connectivity, while rear electric windows and parking sensors, automatic climate control and heated front seats are all optionally available on the top trim level.