Dacia has updated its budget Sandero, and it faces a strong new five-door rival in the shape of the Ford Ka+ 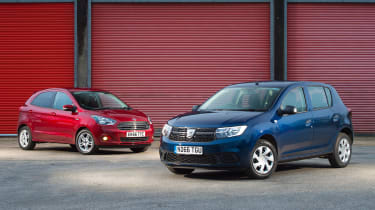 Since its return to the UK market nearly five years ago, Dacia has proven a surprise hit. The brand’s blend of value pricing and a no-nonsense buying experience has won it a whole legion of fans, while models such as the Sandero have served up new car peace of mind at used car prices. However, even Dacia knows it needs more than low costs to keep buyers interested, so it has treated its entry-level model to a mid-life refresh. 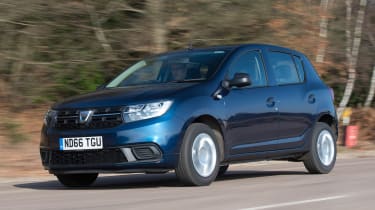 At a glance, you’ll struggle to spot the updates to the Dacia Sandero. The tight margins at this budget end of the market mean any tweaks have been minimal in order to keep costs in check.

Still, the revised headlamps with LED running lights look smart, as do the 3D effect tail-lights. Inside, there’s a new soft-touch four-spoke steering wheel and some satin-finish trim inserts, but it still feels more functional and low-rent than the Ford.

Under the skin, the Sandero remains unchanged. This means you get a structure related to that of the second-generation Renault Clio, which made its debut in 1998. The engine line-up is also familiar, with the exception of the naturally aspirated 74bhp 1.0-litre three-cylinder petrol that replaces the decades-old 1.2-litre. However, the turbocharged 0.9-litre TCe tested here is still the pick of the bunch; not only is it more powerful than the new unit, it also emits less CO2 and claims stronger economy. 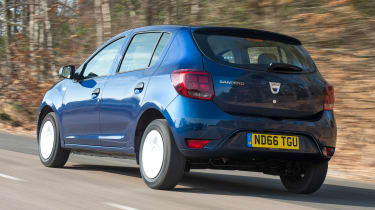 At the track, the Sandero sprinted from 0-60mph in a sprightly 10.6 seconds, which was a full 1.5 seconds faster than the Ka+. The Dacia extended its advantage during our in-gear tests, where it went from 50-70mph in fifth 4.1 seconds faster, with a time of 13.4 seconds.

The Sandero immediately feels more muscular than its rival on the road, too. It’s not as refined and the power delivery is a little jerky at low speeds, but once the revs rise above 2,500rpm, the thrummy three-cylinder unit pulls strongly.

However, while the Dacia comfortably beats the Ford in a straight line, its chassis lags a little way behind. There’s plenty of grip and the Sandero always remains safe and predictable, but the weighty steering suffers from kickback over bumps, while body movements aren’t as well controlled. 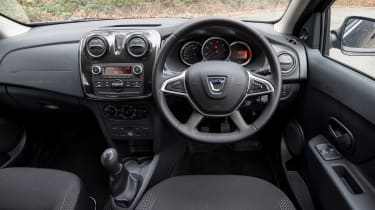 On the plus side, the soft suspension set-up allows the Dacia to soak up bumps and potholes with surprising suppleness, while the tall top gear helps make light work of motorways. There’s some wind noise and a distant hum from the engine, but the car is a capable long-distance cruiser.

Around town, the Sandero’s notchy gearshift and occasionally stuttering power delivery take some getting used to, but the large windows and raised driving position make it easy to place. There’s decent space up front, plus plenty of handy storage. It’s a little more cramped in the rear, but this is partly offset by the generous 320-litre boot.

And while our Ambiance-spec car looks a little basic on its steel wheels, it gets all the essentials, such as air-conditioning, Bluetooth, central locking and electric front windows. 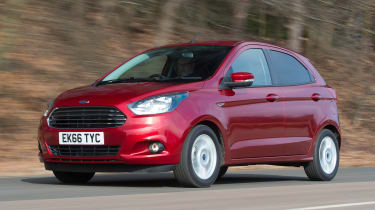 This third-generation Ka+ takes a more sensible and sober-suited approach than the fun and funky 1996 original.

Designed and developed by Ford’s Brazilian arm, the five-door model is bigger than before and designed with cash-strapped emerging markets in mind. However, it’s based on the current Fiesta platform, while the brand’s European engineers have extensively tweaked the chassis to deliver sharper responses and greater refinement.

These efforts have paid off, because on the move, the Ka+ delivers a more mature and accomplished driving experience than the Dacia. 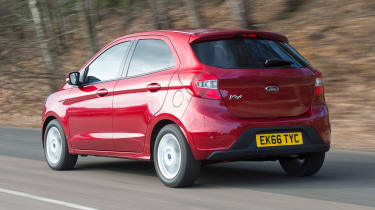 In fact, in many respects, it feels much like the more expensive Fiesta. There’s the same accurate and well weighted steering, while the gearshift has a slick and precise action. Body control is excellent, plus there’s plenty of grip. Ride comfort is good, too; the Ford smothers bumps with greater composure than the Sandero, plus there’s less road noise transmitted through the suspension.

The Ford’s 1.25-litre four-cylinder is also more muted, only becoming intrusive when extended. However, what it gains in refinement, it loses in performance. Engineers have tuned the unit for low-down torque, so the Ka+ feels eager enough below 2,500rpm but soon becomes strained.

As a result, it trailed the Dacia in all our performance tests; it was 1.5 seconds slower from 0-60mph, with a time of 12.1 seconds. In the third-gear sprint from 30-50mph, it took 6.7 seconds, which was 2.1 seconds behind its rival. Out in the real world, the gap in performance is noticeable, especially when you break free of the urban jungle for any motorway cruising. 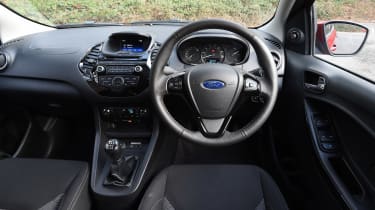 When you do, standard cruise control on the Zetec model we test here means it’s a relatively competent cruiser. The five-speed transmission ensures revs are hovering around where the engine’s torque is produced at motorway speeds, so there’s some performance available if you need it – but it can’t keep pace with the more lively Dacia, particularly up longer inclines.

There are some more luxurious options available, such as heated seats (£150), climate control (£275) and a £300 City Pack that includes parking sensors and electric mirrors. But these take the price of the already more expensive Ka+ way above even the flagship Sandero Laureate. 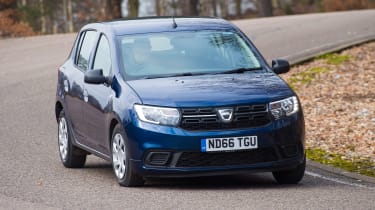 If you’re after a comfortable and practical runaround that won’t break the bank, it’s hard to look past the Sandero. Dynamically, it’s outclassed by the Ford, but it drives well enough and is powered by a smooth and eager engine. It also delivers decent equipment and will cost peanuts to run. 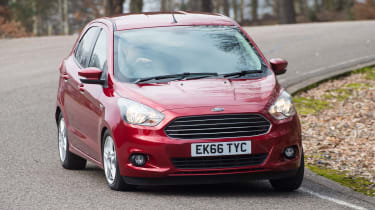 The Ka+ is a refined compact hatch that offers a more relaxed and grown-up driving experience than the Sandero. It also features a classier cabin and is available with some desirable options. But in a sector where value is everything, the Ford’s hefty price premium is hard to justify.