Has a facelift given the Dacia Sandero a boost without diminishing its value appeal? 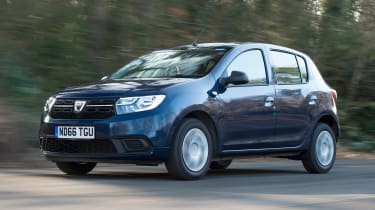 In terms of dynamics, quality and style, this facelifted Sandero trails most modern choices in the supermini and city car markets. However, the Ambiance and Laureate models get desirable additional equipment for no extra outlay, while this eager TCe engine brings a welcome dose of driver appeal. Better still, the Sandero’s value for money remains undimmed and buyers looking for the most space and kit for the cash won’t be disappointed.

With its value-for-money pricing and no-frills approach to design, Dacia has proven a surprise hit in the UK. Yet even the Romanian brand realises that its utilitarian models need a refresh from time to time. So nearly five years after making its debut, the popular Sandero hatchback has been given a little nip and tuck.

However, due to the tight financial margins imposed on such attractively priced cars, it’s no surprise to find the changes have been kept to a minimum. 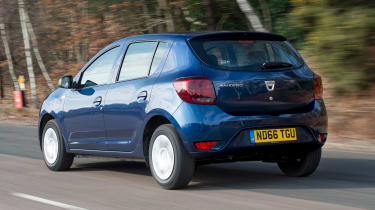 In fact, it’s only eagle-eyed fans who are likely to spot the reprofiled bumpers front and rear, plus the new headlamps with their LED light signature and the 3D-effect tail-lamps. There is also a range of new wheel designs for the flagship Laureate model, but our mid-spec Ambiance test car makes do with 15-inch steel wheels covered in plastic trims.

The brand’s designers have taken an equally low-key approach to the interior. There’s a new four-spoke steering wheel with satin-effect chrome trim inserts, helping lift the mood a little, although in all other respects the cabin retains the same no-nonsense design as its predecessor. While the hard plastics still look a little low rent, they feel robust, and at this price you can’t complain.

The entry-level Access model is sill extremely basic, with unpainted black bumpers, no stereo and wind-up windows, but other models in the range have been given an extra helping of kit. For instance, the Ambiance now gets desirable additions such as air-con and an upgraded stereo with DAB, while the Laureate benefits from the brand’s MediaNav infotainment system, with a seven-inch touchscreen. 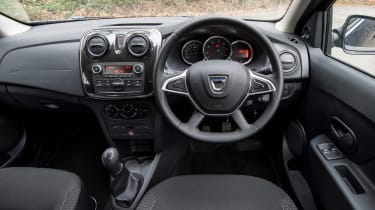 The biggest change under the skin is the adoption of a new, Renault-sourced naturally aspirated 74bhp 1.0-litre three-cylinder engine; this replaces the ageing 1.2-litre four-cylinder unit. However, even this can’t match our test car’s more powerful 898cc turbo for economy and emissions. It claims 54.3mpg and 117g/km, compared with our version’s 57.6mpg and 109g/km.

Costing an extra £800 over the entry-level 1.0, the torquey TCe unit delivers surprisingly sprightly performance. There’s some lethargy at very low speeds, but once the turbo starts spinning at around 2,000rpm, the Sandero accelerates eagerly.

However, the boost comes in suddenly, meaning gentle throttle applications are needed for steady progress. Noise insulation could be better as well, although the thrummy three-cylinder sound is far from unpleasant and never intrusive on a long journey, thanks to a relatively tall top gear.

The rest of the driving experience will be familiar to owners of the old Dacia, which means it still trails more modern and more expensive mainstream rivals. There’s decent grip and the handling is always safe and predictable, but occasional kickback through the steering, lots of body roll and a notchy-feeling gearshift are reminders that the Sandero can trace its roots back to the Mk2 Renault Clio, which made its debut back in 1998. 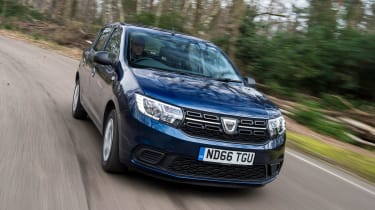 It’s not all bad news, though, because the soft suspension delivers a reasonably cushioned ride. Low-speed ridges and potholes are shrugged off, while on faster roads the Sandero soaks up bigger bumps.

The driving experience isn’t the only thing that remains unchanged, because the Dacia still delivers plenty of space for the cash. For instance, the 320-litre boot rivals practical models such as the Skoda Fabia and Suzuki Baleno, while folding the 60:40 rear bench frees up an impressive 1,200 litres. Only the slightly cramped rear legroom betrays the car’s old-school supermini roots.

Dacia hasn’t forgotten its value-for-money mantra, either. The entry-level car still comes in at an eye-catching £5,995, while even a range-topping Laureate fitted with the 89bhp 1.5 dCi diesel will set you back only £10,195 – around £6,000 less than an equivalent Ford Fiesta 1.5 TDCi.