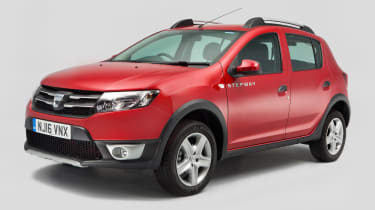 Due to its bargain price, it would be easy to dismiss the Dacia Sandero as an also-ran that could never rival the likes of the Peugeot 208, Kia Rio or even the DS 3. But the reality is that as an overall ownership proposition, it trounces these cars as they rank well below the Dacia in this year’s Driver Power survey. While the Sandero’s engines are rather uninspiring, and basic editions offer little in the way of feelgood factor, there’s no denying the value the Dacia provides. So if you’re looking for cheap motoring but don’t want to compromise reliability, comfort or practicality, we’d recommend you get better acquainted with the Sandero.

British buyers love their premium models, so the idea of launching a budget car brand might have seemed crazy to many people when Dacia arrived here in 2013.

This Renault subsidiary started out as Romania’s national car maker 50 years ago, but was absorbed into the French giant’s portfolio in 1999. And it swiftly made waves by launching the UK’s cheapest car, in the shape of the sub-£6,000 Sandero.

But while this supermini follows Dacia’s template of providing reliable, practical transport on a budget instead of focusing on cutting-edge tech or design flair, there’s more to it than just a low price. The brand offers a range of engines, well equipped higher-spec models and a rugged-looking, crossover-style Stepway model. And owners tell us they love their Sanderos.

The Mk1 Dacia Sandero was on sale 2007 and 2012, but it wasn’t available in the United Kingdom. The successor arrived early in 2013, and it is this Mk2 model that we’re focusing on here. 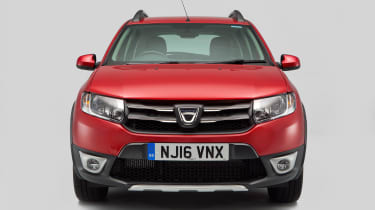 The first Dacia Sanderos hit UK dealers in January 2013. Buyers could choose from 73bhp 1.2 or 90bhp turbocharged 0.9-litre petrol engines, plus a 90bhp 1.5 diesel. At launch there were Access, Ambiance and Laureate trim levels, as well as the chunky Stepway, but in March 2015 a Laureate Prime was added. This new range-topping car had Cosmos Blue metallic paint, electric rear windows, upgraded interior trim and a seven-inch multimedia touchscreen.

There’s only one bodystyle and one transmission option for all Sanderos, so it’s just a question of working out which engine and trim level suits you best. 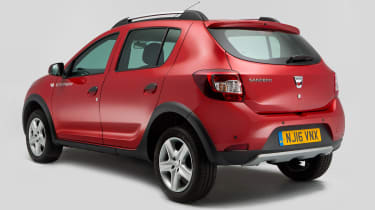 Entry-level Access models feature steel wheels, black bumpers and manual windows. They don’t even have a radio, although they do get power-steering, ESP, tyre pressure monitors and a split rear seat. Move up to the Ambiance and there are body-coloured bumpers, more upmarket interior trim, remote central locking, electric front windows, Bluetooth and a radio.

Alternatives to the Dacia Sandero Mk2

For the same money as a used Sandero there are plenty of alternatives, but they’ll generally be older and have higher mileages. The Hyundai i20 and Kia Rio aren’t the value buys they once were, but feature tempting warranties. Peugeot’s 207 and 208 are in plentiful supply, feel plusher than the Dacia and come with some excellent engines. The same is true of the Renault Clio. Also great value are the Ford Fiesta and Vauxhall Corsa; they feel posh compared with the Sandero, have wide ranges and there’s loads of choice.

If you have a puncture, you’ll need to use the tyre inflation kit that comes on all Sanderos. But dealers will sell you a spare wheel as an extra-cost option. 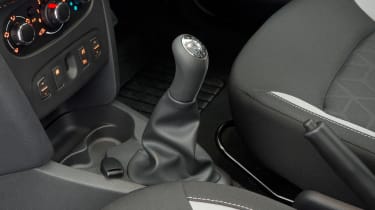 A five-speed manual is the only transmission option on the Sandero; Dacia doesn’t offer an auto. So if you like two-pedal motoring you’ll have to look elsewhere.

The loading sill for the boot on the Stepway is quite high and gets damaged easily. Stick-on protectors can be fitted, and are well worth investing in.

Some owners haven’t been impressed by the output of the standard headlights so they’ve upgraded the bulbs. Osram Silverstars are a popular choice. 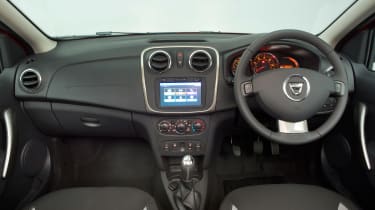 Not only does the Sandero offer more cabin and boot space than many rivals, trim quality is better than you might expect. Most cars have limited steering wheel and seat adjustment and entry-level models are best avoided as they’re spartan. The 320-litre boot expands to 1,200 litres with the seats folded.

All Sanderos need servicing every 12 months or 12,000 miles. Costs vary according to the dealer’s location, but a minor check-up is generally priced £149-£169 and a major one £269-£299; services alternate between the two. 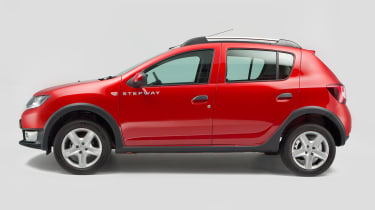 Interestingly, although parent company Renault has issued no fewer than 24 recalls since Dacia was launched in the UK at the start of 2013, the budget brand itself has yet to launch any campaigns at all.

So while many of the Sandero’s Renault sister models have been called back to dealer workshops to resolve potential issues with their braking systems, fuel leaks, steering glitches and suspension failures, the Dacia supermini seems to be holding up pretty well.

The Sandero made its first appearance in our Driver Power satisfaction survey in 2014, in 43rd place. It fell to 53rd in 2015, then rose to 30th this year. Running costs and reliability (ninth and 19th) were 2016’s highlights, alongside in-car tech (28th) and ride quality (38th). Seat comfort and build quality held the car back, at 91st and 87th respectively.