The Dacia Sandero has been facelifted for 2017 with extra kit and a new engine, but have the updates resulted in an improvement? 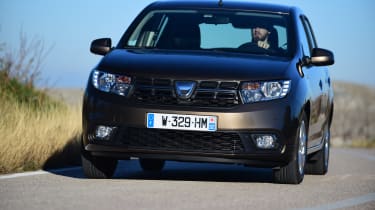 Updates to the Dacia Sandero mean it’s better value than ever, with more equipment and a new engine under the bonnet. While it is a bit noisy, the new 1.0-litre petrol’s low insurance group means it’s a good choice for young drivers and a kit list including a DAB radio and USB connection will suit them as well. The Dacia is still very basic, however, and feels old-fashioned next to rivals such as the Skoda Citigo.

Dacia has updated its entire range, with the new set of cars getting a handful of small changes to the styling but also a brand new engine: a 1.0-litre three-cylinder petrol that sits in the entry-level models, replacing the old 1.2-litre unit.

The super-affordable £5,995 Sandero Access model is available in the UK with the small engine and Dacia’s UK boss reassured us that “we do sell some” of the stripped-back supermini but we’ve tested the new Sandero in Ambiance trim. After all, most will go for the higher specification, as you get essentials such as air-conditioning, a DAB radio and electric windows. 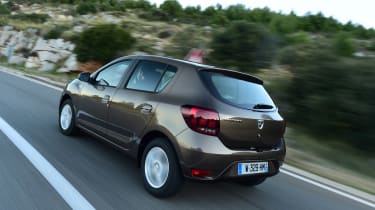 At £6,995, the Sandero Ambiance is genuinely better value than ever. Because the price hasn’t changed yet there’s more kit, buyers are getting even more for their money. There’s also the fact that rivals’ prices have been creeping up over the past few years, while the Dacia’s have remained steady.

Price is so important for the Dacia range, so we’re glad that the Sandero remains such good value. The Ambiance model comes with the essentials we’ve already mentioned, but also USB and Bluetooth connectivity, remote locking, a new-look dashboard and hill start assist. It’s a basic but commendable kit list for a car of this price, though the Sandero Ambience is hardly packed with of toys.

The main changes for the facelifted model are the new headlights and taillights, which now have a more distinctive light signature, as well as reshaped bumpers and a new grille. The overall effect is subtle, though the car does look a bit more modern than before.

The driving position is comfortable enough, and the ride was good on our test drive in Croatia. There aren’t any changes to the suspension set-up, so the Dacia should retain its smooth ride in the UK as well. We would say, however, that the refinement at speed is compromised slightly by the new SCe 1.0-litre petrol.

While the new unit has a typically fun three-cylinder sound, it is louder in the cabin than the other engines, especially at higher speeds where it tends to drone away in the background. It sends a lot of vibrations through as well - the TCe turbo petrol engine is a better all-round choice.

Economy of 54.3mpg in the new engine doesn’t match the 57.6mpg of the pricier turbo, although we expect both to return similar figures in the real world. The 1.0-litre engine does have a trump card to play, though: it sits in insurance group 4, with the turbo engine in group 9. That makes it a much better pick for young drivers while the punchy dCi diesel is a solid choice for anyone else, returning 80.7mpg. 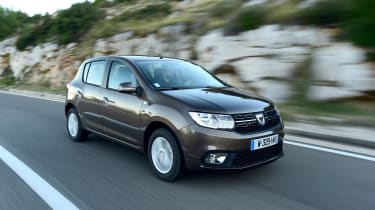 Taking 14.2 seconds to get from 0-62mph, the SCe 75 engine feels lethargic in the Sandero, especially as you need to rev it hard to get any performance out of it. It’s not as much fun to do that as in rival 1.0-litre cars such as the Skoda Citigo, either.

The Citigo really shows up the Sandero when it comes to handling as well, with the Dacia suffering from body roll in corners and lifeless steering. The Skoda is a smaller car, sitting in the class below, and is quite a bit more expensive to buy but you’ll only be paying a little more per month for it if you use a PCP deal.

As before, there’s plenty of space in the Sandero with a 320-litre boot, expanding to 1,200 litres with the 60/40 split rear bench folded. That’s much bigger than the 251/951-litre space in the Citigo, and there’s much more space in the back for passengers as well. For practicality, as well as in most other areas, the Dacia Sandero still is a lot of car for the money and the five-year warranty for just £395 (3 years as standard) means it’ll appeal more than many used cars, too.