The Ford Ka+ White Edition adds extra styling and comes loaded with kit, but does it offer value for money? 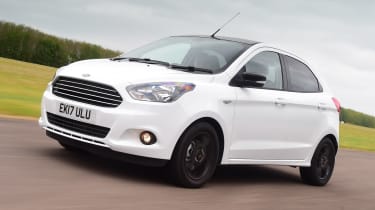 The Ford Ka+ remains a comfortable and spacious small car, but one that’s still only available with sub-par engines. This White Edition spruces up the otherwise mundane styling and comes loaded with kit, but it’s no better-equipped out than a regular Zetec model – a car that costs £600 less to buy.

When the Ford Ka+ arrived in the UK last year, it represented such a big step in a new direction that bosses felt it necessary to add the ‘+’ suffix to the established Ka name.

This new model is a five-door-only sub-supermini designed to rival small cars like the Volkswagen up! and Renault Twingo. It’s noticeably larger those models though, thanks to the fact it shares its platform with its bigger brother, the Fiesta.

With prices kicking off at £9,545, the Ka+ offers supermini space for a city car-rivalling price. Now, however, Ford has added a pair of range-topping special editions that pushes the list price all the way up to £11,545. A Black Edition is available, but it’s the White Edition we’re driving in the UK for the first time. 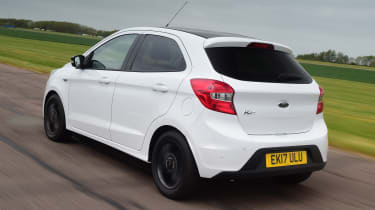 But while the tweaks are intended to give the Ka+ a sportier, standout image, the engine is the same naturally aspirated 84bhp 1.2-litre four-cylinder available elsewhere in the range. It can’t compete with the new generation of smaller, turbocharged 1.0-litre three-cylinder units now available in so many of its rivals, either.

The 0-62mph sprint takes 13.3 seconds, while low peak torque of 112Nm means the Ka+ isn’t all that nippy. It’s not as economical as downsized rivals either; Ford claims just 56.6mpg, with a comparable Kia Picanto returning more than 60mpg. 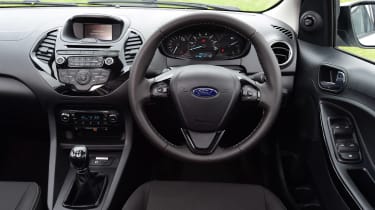 However, what the Ka+ lacks in city-car zip and fuel economy, it makes up for with refinement. The Fiesta platform means it’s good to drive once up to speed and despite the five-speed gearbox it’s a quiet car even at motorway speeds. A soft ride means it’s pretty comfortable too. The handling is sharp and the steering direct, too.

The wheels have been pushed out to the corners of the car, which translates to an impressively roomy cabin. The roofline sits 29mm taller than on the Fiesta, allowing lots more headroom in the rear. There’s even a decent 270-litre boot, which sits just 20 litres shy of the outgoing Fiesta.