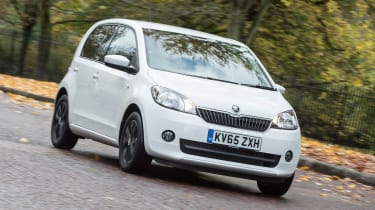 The Black Edition is a welcome addition to the Citigo range even if it isn't as bold as some may hope. It gets more equipment than the standard car for not a lot more cash, and it doesn’t change the regular model’s impressive dynamics and sense of solidity. The Citigo’s three years old now, but in terms of space, value, driving and running costs, it’s still top of the pile.

Small city cars like the Skoda Citigo used to be considered basic transport, but now they also need to cater for image-conscious buyers to be popular. For example, just look at the sales figures of the Fiat 500, which is arguably more about fashion than form.

Special editions are a good way of boosting a car’s appeal with minimal effort, and Skoda has taken a leaf out of that book with this new Citigo Black Edition.

The car we drove was finished in white, but unsurprisingly the Black Edition is also available in black. Other styling enhancements include black 15-inch alloys and tinted windows to give the car a slightly more upmarket appearance. 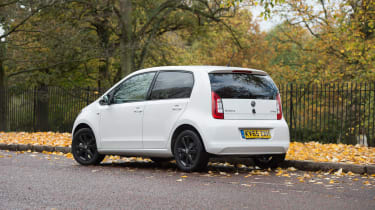 These aren’t exactly distinctive additions, but they all help the Citigo look a step above basic, even if the SEAT Mii and VW up! are, in our eyes, the more attractive of the city car trio.

It’s not all about the style upgrades with the Black Edition, though. For the £855 premium over the Citigo SE, you get Skoda’s portable nav and infotainment system, plus the entertainment pack with four additional speakers. That’s on top of standard air-conditioning, electric front windows and Bluetooth connectivity.

All in, it’s a healthy chunk of extra kit and style for not a lot of money, as the car still comes in at under £10,000 in three-door form. And while rivals like the Toyota Aygo are a bit nicer inside, it’s very well laid out and put together. It’s also more spacious than you’d expect, with room for two adults in the back and the biggest boot in its class. 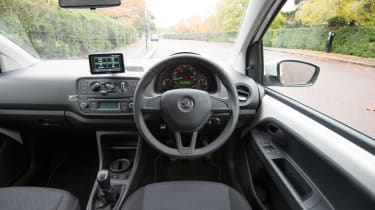 On the road, the Black Edition is the same as the regular car. That means it feels a lot like a full supermini rather than a cut-price city car thanks to a comfortable ride and impressive motorway refinement. The torquey and efficient three-cylinder petrol engine also remains quiet unless you really rev it.

Plus, the Citigo is fun and agile to drive courtesy of the precise, well weighted steering and excellent body control for a car of this type. What else would you expect from our 2015 City Car of the Year, after all?