The new SEAT Mii electric has plenty of plus points, but is ultimately let down by its price 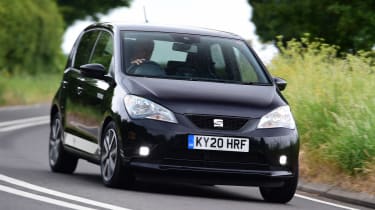 If you want to downsize and go electric, but don’t want to forgo the luxury kit and quality you’re used to, then the SEAT Mii electric hits all the right notes. You’ll enjoy the relaxed, comfortable nature of the drive, too. But sadly, the car gets out-punched by its competitors when you get the calculator out – which isn’t really what we expect from a SEAT.

Small, posh, zero-emission cars could be just the thing right now, so SEAT’s timing of the all-electric version of its Mii city car is absolutely spot on.

It comes in a one-trim-suits-all package for £19,800, after HMRC’s £3,000 plug-in car grant. That’s expensive for a city car, but it has an impressive amount of big-car kit and, more importantly, a real big-car feel. Plus – not that petrol Miis were ever thirsty – you’ll be saving plenty of cash on fuel.

The Mii (like its sister cars, the VW up! and Skoda Citigo) has always defied physics in the way it drives: it’s quiet and rides nicely, unlike so many of its competitor city cars. Likewise, it’s superbly built and wears its ten-year lifespan well.

Electric power and the Mii are perfect bedfellows, too. With an 82bhp electric motor, acceleration is nippy – 0-31mph in 3.9 seconds is a much more important benchmark than 0-62mph in 12.3 – while the car’s near-silent electric motor further enhances the ‘little luxury’ experience. 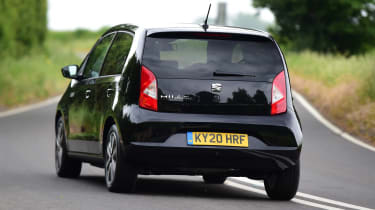 Its decent 36.8 kWh battery pack is enough for a claimed 161-mile range, and it charges in as little as an hour from a 40kW charger, or more realistically overnight at home.

We’ve always been Mii fans, and that’s still true of the electric version. There’s plenty of leg and headroom in the driver’s seat, a big, clear speedo dominates the instrument binnacle, and easy-to-use climate control and audio systems sit in the centre of the dash, where rivals would be tempted to shove an overly-complex touchscreen. Instead, the Mii has a handy smartphone cradle, so you can use your own choice of nav. It’s all connected via Bluetooth, too.

The seats are comfortable, there’s decent storage, and if you carry people in the back they’ll be surprised, as will you, that their knees won’t dig into your back. However we’ll leave you to decide if you like the crazy patterns on the white dash; we’re not fans.

What’s also slightly odd in an electric car is that it still starts with a key. Slide the gearlever into drive, release the manual handbrake, and off you go. We recommend nudging the gearlever down once more to get maximum brake regeneration, so you rarely have to touch the brake pedal.

Then, as with all electric cars, you have to resist the temptation to point and squirt – flooring the throttle for an instant hit of torque and a fun burst of acceleration. Do that often and you’re unlikely to get near that claimed 161-mile range. 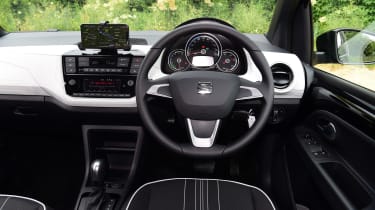 Similarly, on the motorway, the expected range will drop at quite a rate. In fact, the car’s range meter will vary quite a bit; on the motorway we saw the range dip below 50 miles, but return into the 70s when we were stopping and starting around town. A little more accuracy in that would be welcome.

Despite the odd short burst of acceleration, there’s not a huge amount of fun to be had in the Mii electric. Its upright stance means it’ll never encourage you to corner quickly, the steering is set up for ease of use rather than fun, and the acceleration beyond 30mph isn’t as enjoyable as it is up to that speed.

But the Mii is supremely comfortable, riding bumps and potholes in a way that a car with such a short wheelbase really shouldn’t, and providing an impressive level of comfort for something so small.

As with any purchase, especially an EV, the calculator has a big part to play. And posh though the SEAT is, it’s only £700 less than its VW equivalent and pretty much the same as a Skoda Citigo-e iV SE L. However, the killer is that the Citigo SE (albeit with less kit) is well over £2,000 cheaper. Then there’s what else is out there, and what deals are on offer. Our top small EV is the Renault Zoe, and some pretty tempting lease deals are around.