We pitch sporty versions of the Kia Picanto and SEAT Mii city cars together, but which comes out on top? 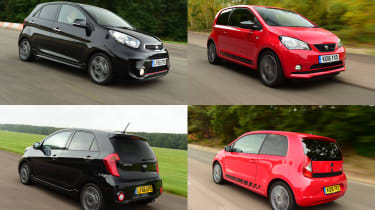 This pair of scaled-down city cars aims to deliver Tardis-like practicality, with dinky dimensions to help navigate busy, built-up areas and five-door bodies that offer easy access to a respectable amount of interior room, as well as decent levels of boot space.

But these models have another personality trait that their makers hope will add to their appeal. Kia has added the Picanto Sport to its line-up, meaning buyers looking for an affordable small car don’t have to sacrifice style in the pursuit of usability and low running costs. SEAT has also tweaked its Mii with the addition of the FR Line trim, giving sporty looks without affecting efficiency. But which city slicker is more enjoyable to drive, combining these athletic looks with practicality and affordability in the best package? 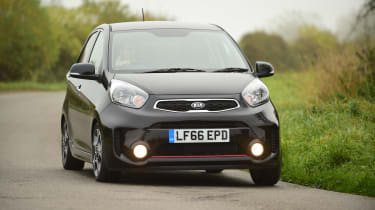 The Kia Picanto has been around for even longer than the VW Group trio, but it benefited from a facelift last year aimed at keeping it looking and feeling fresh in the face of newer rivals.

While lesser models in the range appear a little mundane, like the SEAT, Kia has thrown a host of racy add-ons at the Picanto Sport to give it extra kerb appeal. There are 15-inch alloys and tinted windows, plus more aggressive-looking bumpers, thicker side sills and a twin exhaust tailpipe. Inside, the normally dark layout is lifted by two-tone cloth and fake leather, gloss black plastic and aluminium pedals. The extras bolster an already smart design, and the Picanto matches the SEAT for kerb appeal.

The Kia also offers more equipment: while the Mii is hardly sparse, it misses out on its rival’s USB connectivity, electric rear windows and climate control. Also standard in the Picanto is an excellent seven-inch touchscreen sat-nav and infotainment system, whereas the SEAT makes do with the ungainly dashtop-mounted Garmin unit. 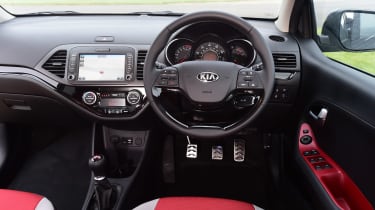 The 84bhp 1.25-litre petrol is the only engine option in the Kia, and it leaves the Mii trailing in terms of power. As a result the Picanto put in an impressive 0-62mph time of 10.7 seconds, but it only feels noticeably faster than the SEAT if you keep the engine on the boil – peak torque doesn’t arrive until 4,000rpm. It’s also not as refined, with a coarse note intruding as the revs build.

Unlike the Mii, there’s no sportier suspension to go with the Sport badge on the Kia. Even so, the ride isn’t as settled, fidgeting round town and crashing into expansion joints despite an initial softness.

Don’t think this makes the Picanto fun to drive, however; it’s nippy and agile on city streets, but up the pace and there’s still noticeable body roll, while the steering lacks feel and is slower. Add in more noticeable wind and road noise out of town, and the Picanto feels more at home in the city, and shows its age more than the SEAT.

On paper the Picanto is also more expensive than its rival – but there are a couple of things to remember if you’re doing the numbers. The first is that Kia is currently offering an additional £1,000 off the Sport trim tested here, and SE editions, if you take a test drive before you buy.

The second is that a brand new Picanto is due to make its debut next spring, so dealers may well be more inclined to haggle.

Either way, the smallest Kia still delivers on the firm’s brand values of a solid ownership proposition. It gets the brand’s transferable seven-year warranty, and is available with three years of fixed-price servicing from just £299. 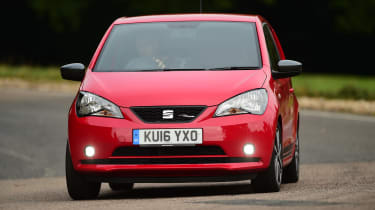 The Mii city car shares its mechanical make-up with the Volkswagen up! and Skoda Citigo, but as SEAT is positioned as the sportier mainstream VW Group brand, it’s always offered sharper looks and a racier feel. The up! has been the upmarket choice and the Citigo the value proposition.

So apart from the minor suspension tweaks, it’s more of a cosmetic makeover to give buyers another choice alongside the entry-level SE and more style-led Design Mii with its extra customisation options.

Although our pictures show a three-door, we’re testing a five-door here to match the five-door-only Picanto – and as it weighs in at £11,320 with SEAT’s 74bhp 1.0-litre three-cylinder engine, the FR Line Mii undercuts the Picanto Sport by £825.

While the Kia only gets a higher-powered 1.25-litre unit, the SEAT is also available with a 59bhp version of the three-cylinder engine if budget is more important than performance. However, you’ll only save £165 if you stick with the five-door bodystyle and lower-powered engine in FR Line trim.

There are no diesels available in the Mii range, but that’s no problem, as the 1.0-litre petrol line-up offers surprisingly punchy performance (especially this 74bhp engine), as well as decent efficiency. 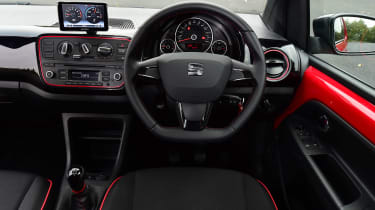 On test the SEAT sprinted from 0-60mph in 12.1 seconds – faster than the official claims but 1.4 seconds down on the Picanto. The downsized, naturally aspirated engine produces only 95Nm of torque relatively high up the rev range at 3,000rpm, yet thanks to the five-speed manual’s short gearing the Mii FR Line’s in-gear times were respectable; it took 15.1 seconds to cover 50-70mph in fifth.

However, it’s the way the SEAT drives and rides that makes it such a great city car. The steering is particularly nicely weighted and direct in a market where many of the set-ups on offer are simply over-assisted. And the five-speed gearbox has one of the slickest, most precise shifts you’ll find anywhere.

Most city cars end up with their rear seats being used as a dumping ground for shopping – and the modest boots on offer here demonstrate why – but if you do need to get people into the back of the Mii, they’ll be more comfortable than they would in the Picanto. Then again, if you regularly do need to go four up, you’d be better served looking for a monthly deal on a cheap supermini than a relatively high-end version of a city car.

A good city car needs to cope with the rigours of urban life but also deliver comfort on the motorway. The Mii does just that, and will be cheaper to buy and run than the Kia, not to mention more practical. Although the SEAT is slower, it’s still more fun to drive and offers surprising refinement for the price. 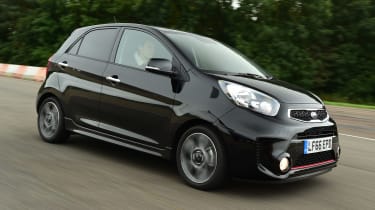 The Picanto is feeling its age in places, but it’s still a stylish, solidly built supermini with lots of kit. It also offers strong performance, yet the rest of the driving experience trails its rival. It’s less refined, less efficient and not as spacious, either, although the seven-year warranty boosts the ownership experience.