The new jacked-up Kia Picanto X-Line joins a rapidly growing list of micro SUVs, but how does it compare to its rivals? 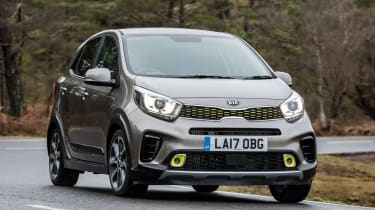 This new X-Line addition to the Picanto range certainly makes Kia’s solid city car a bit more exciting but day in, day out you’d be better served by one of the more regular members of the line-up, especially if you value comfort – the 16-inch wheels on the X-Line unsettle the ride quite noticeably.

It seems that there’s no escape from the crossover craze. If the rapid influx of purpose built crossovers and small SUVs wasn’t enough, we also have a number of popular city cars now available with jacked-up suspension and more rugged looks to try and tempt buyers.

Kia’s Picanto X-Line is the latest small car to join the niche and do an SUV impression. Compared to its main rivals – the Vauxhall Viva Rocks, Fiat Panda City Cross and the Suzuki Ignis – there’s nothing out of the ordinary. The ride height has been raised by 15mm compared to a standard Picanto, while it also gets an off-road inspired bodykit and some choice equipment additions.

The exterior makeover is completed with LED daytime running lights and LED taillights, while other equipment highlights include automatic emergency braking and automatic headlights. 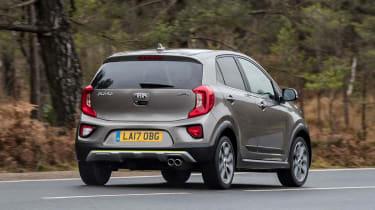 We’re still waiting for Kia’s new turbocharged 1.0-litre three-cylinder petrol engine to make its way under the bonnet of the Picanto, so the larger, older 1.25-litre four-cylinder unit is still used here.

That’s not necessarily a bad thing, however. The new 1.0-litre turbo will be more economical and powerful, while adding a needed smattering of torque, but it’ll struggle to be as refined as this four-cylinder unit, which is impressively hushed even at motorway pace in fifth gear.

Sadly, that doesn’t mean that the Picanto X-Line is a quiet car. Wind noise is fairly noticeable, but the biggest bugbear comes from those low profile tyres necessary to accommodate the 16-inch alloy wheels, as there’s a fair bit of road noise. They spoil the ride too, so despite that additional bit of travel in the suspension the X-Line feels busy, and isn’t as comfortable as the Viva Rocks.

The X-Line is more fun to drive than its Vauxhall rival though, with more power and torque, sharper steering and a sweet shift to the five-speed gearbox. The interior is better too, with a more modern, colourful design bespoke to the X-line and decent materials. It gets a flat-bottomed steering wheel and sporty stainless steel pedals, but the centrepiece is a slick seven-inch touchscreen infotainment system fitted as standard. A similar display is optional in the, admittedly cheaper, Vauxhall. 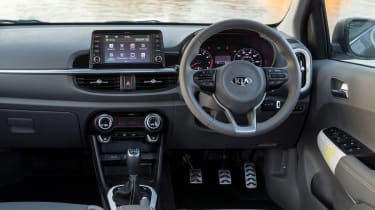 With a 255-litre boot it’s more practical than the Viva Rocks too, but the load space isn’t quite as generous as the 267-litre boot in the Suzuki Ignis, which is still the class leader amongst these micro SUVs for space and driving fun – it’s also a smidgen more economical on paper.

While a similarly specced Ignis SZ-T doesn’t feel quite as well finished in the cabin and is £404 more on list price, it’s competitive with the Picanto X-Line on a monthly PCP deal, being only a few pounds more per month.

Alternatively, and if you’re drawn in by the Picanto regardless, a non X-Line model on smaller wheels would be a better choice. For instance, a Picanto ‘3’ is almost negligibly more expensive, but drops the faux-crossover looks in favour of more equipment.