The Vauxhall Viva Rocks takes the fight to the Suzuki Ignis in the crossover-inspired city car sector, but what's it like on the road? 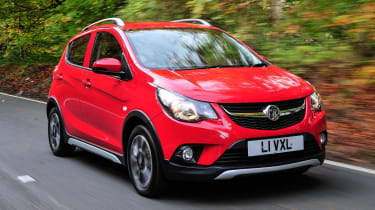 Vauxhall wants to court younger buyers with the new Viva Rocks. Those potential customers won’t find it any more fun to drive than the regular car, but it boasts a bit of additional style, with an extra dose of comfort. The only odd quirk is the kit list; while it’s well equipped, the new range-topper misses out on trinkets that are standard on lesser versions.

The appeal of the crossover apparently knows no bounds. Latest in line is the Vauxhall Viva Rocks – a new SUV-inspired version of the firm’s smallest model, intended to inject a bit of youthful appeal into the slow-selling city car.

Lining up as a rival for the Suzuki Ignis and the forthcoming Kia Picanto X-Line, it boasts little in the way of revisions under the skin. In fact, the sole mechanical change is an 18mm boost in ride height. The suspension components are carried over unchanged, while under the bonnet it uses the same naturally aspirated 1.0-litre three-cylinder petrol engine producing 74bhp and 95Nm of torque.

As such, it’s really not a bone-fide SUV. Instead, it’s more of an exercise in styling – and joins the heavily-cladded Adam Rocks in Vauxhall’s pumped-up small car range. It’s the most expensive Viva you can buy, and comes priced from £11,530. 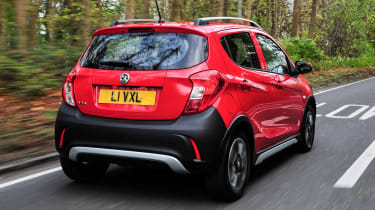 The Rocks gets a tougher look thanks to new front and rear black plastic bumpers, black plastic wheel arches, plus new, brushed aluminium look doorsills and roof rails. You also get unique 15-inch alloy wheels, as well as bespoke interior upholstery. The rest of the cabin remains the same.

You’re paying for those looks, too, as the regular £11,195 Viva SE Nav features more in the way of standard equipment. For example, Vauxhall’s IntelliLink 4.0 sat-nav and infotainment system is conspicuously missing from the car’s kit list – costing an extra £935 on all Rocks models. It’s included in the normal car’s equipment tally.

Elsewhere, you’ll find a six-way adjustable driver’s seat, daytime running lights, air conditioning, cruise control and electrically adjustable and heated mirrors, as well as USB and Bluetooth connectivity as standard. It’s a decent haul for a car of this size. 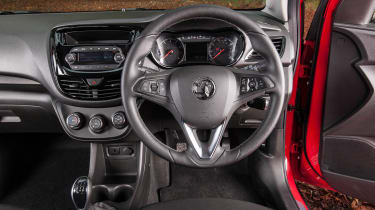 From behind the wheel there’s nothing particularly amiss about the way the Viva Rocks drives. It’s a predictably well-behaved city car, feeling nicely manoeuvrable with light but vague steering. It fills its brief of being easy to drive and easy to park, and it rides reasonably well too; the raised ride height helping in this regard.

The 74bhp unit is fine nipping around town, but quickly finds itself out of its depth on faster roads. It loses out to the more powerful, perkier 1.2-litre four-cylinder engine found under the bonnet of the Suzuki Ignis, and it’s not as economical either. What’s more, the taller body means it isn’t as frugal as the standard Viva – claiming 60.1mpg versus the normal model’s 62.8mpg figure.

The Suzuki is slightly more practical, as well, with the 267-litre boot trumping the Viva’s compromised 206-litre storage space.