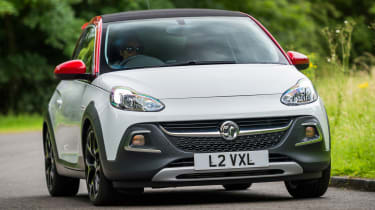 The Vauxhall Adam Rocks S has a punchy 1.4-litre petrol under the bonnet and comes wrapped in a stylish body, but it’s let down by a very high price tag. It’s not particularly fast, nor is it that great to drive, and that’s a problem for a car that costs more than a Ford Fiesta ST. It fills a different niche with the SUV-inspired styling, but the crossover body doesn’t offer anything more than the standard Adam S in the way of practicality.

There’s no shortage of fun, fast small cars available in the UK – you need only look at the Ford Fiesta ST, Peugeot 208 GTi or MINI Cooper S for proof of that.

But this Vauxhall Adam Rocks S appears to have carved its own niche within a niche. It’s based on the more conventional Adam S, but in Rocks form, it also gets some SUV-style body cladding and a raised ride height. 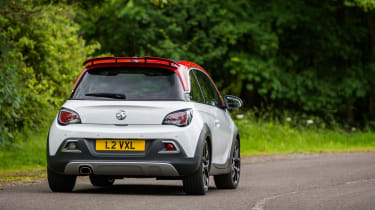 While it sounds like an odd combination, that hasn’t stopped Vauxhall putting it on sale for a barely believable £19,045. That’s £1,300 more than a Ford Fiesta ST, a car that not only sits in the class above in terms of size and space, but also has the edge for speed and handling. If it’s the SUV styling that’s got your attention, then models like the Fiat 500X cost significantly less.

The Adam Rocks S will cover 0-60mph in 8.5 seconds, thanks to its 148bhp 1.4-litre engine, putting it firmly in warm rather than hot hatch territory. The engine is eager to rev and feels punchy in the mid-range, but it’s missing the zing of a proper hot hatch.

It might not be fast, but it is frugal; the 47.9mpg claimed economy and 139g/km CO2 emissions should ensure the Rocks S is relatively cheap to run. The steering is nicely weighted, but it’s a little vague and the raised ride height makes the Adam feel a bit too limp through corners, even with this model’s standard sports suspension. The ride isn’t bad, though, with the car feeling settled on most roads. Adding a sense of involvement are the satisfying, smooth shifts of the six-speed gearbox. 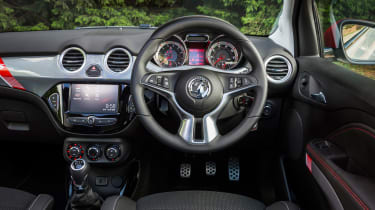 The fact the Adam Rocks S offers nothing special when it comes to performance and handling really puts that huge price tag into focus. If you’re after a hot hatch, there are so many better choices, but if you want something softer, there are cheaper options, too – even the more practical Corsa with the same engine only costs from £17,525.

What the Adam Rocks S does have going for it is the kit list, with a roof spoiler, chrome tailpipe, tinted windows, 18-inch alloys, DAB radio, Bluetooth and USB. You’ll also benefit from Vauxhall’s OnStar service and a fabric sunroof as standard.