The Vauxhall Adam S is the most powerful Adam but can it justify its hefty price tag? 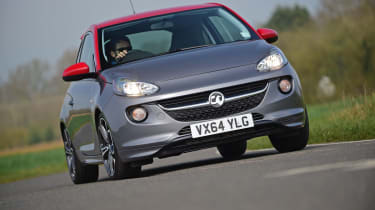 There’s no denying the charm or bold image of the Adam S, and its boisterous stance may be appealing enough for some. Plus, if you drive it assertively, it’s an engaging car and unlike any other Adam in the line-up. However, the main issue is the cost and the competition at this price point. A touch under £17,000 is a huge amount for such a small car, and especially for one that doesn’t really live up to its potential.

The Vauxhall Adam is a member of a gang of small cars that makes no apologies for catering solely for the style-conscious. It may offer buyers up to one million customisable combinations – or so Vauxhall claims – but is rather uninspiring and limp elsewhere.

The new performance-biased Adam S, however, hopes to not only keep the urban fashionistas happy, but also appeal to those who like a slice of substance with their style.

For a short while, the Adam S was called the Grand Slam in the UK, so as to not confuse it with the previous generation base model Corsa S. However, the decision was quickly made for the name to be changed back, so it chimes better with the rest of Europe's sales.

But what else does the Adam S have to offer? Well, it’s one of smartest-looking hatches around. A unique but tasteful bodykit, bespoke 18-inch alloys and two-tone bodywork provide real visual presence. The fixed rear wing isn’t just for effect, either, as Vauxhall claims it aids stability as the Adam approaches its 130mph top speed. 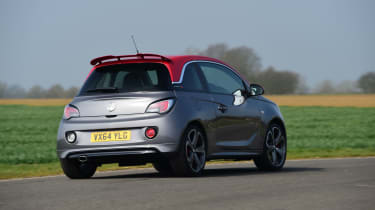 However, the Adam S isn’t all mouth and no trousers, as it’s the fastest and most powerful model in the range. Under the bonnet is the same 1.4-litre petrol engine you’ll find in lesser versions, but Vauxhall has bolted on a turbocharger, doubling power output to 148bhp and increasing torque by a massive 70 per cent to 220Nm.

The result is a thorough warming up rather than a sizzling hot hatch transformation. To get the best out of the car, you have to grab it by the scruff of the neck and really make it work. Below 3,000rpm, the Adam lacks the urgency and rorty soundtrack you’d find in the Abarth 500, but keep your right foot pinned, and it soon comes on song. The revs whip all the way round to almost 7,000rpm, with the central slug of power near the top end.

The need to maintain momentum means you have to work the six-speed manual box, but the narrow gate and short throw encourage rapid changes. And there is plenty of stopping power, too, as brakes from the Corsa VXR have been added, which can withstand lots of punishment. 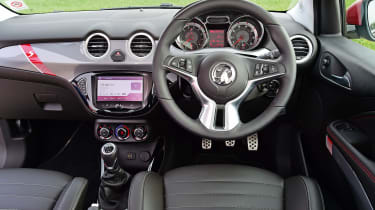 Brisk rather than quick would be an accurate way to describe the Adam’s acceleration, with 0-62mph dispatched in 8.5 seconds. Keep the revs where the power lies – above 3,000rpm – and there’s good fun to be had from the VXR-tuned chassis, too. There’s a huge amount of grip from the front end thanks to the wider track and tyres, while the stiffer springs and dampers help contain the hike in performance.

It does mean that things get a little firm, especially at lower speeds around town, but it’s no less comfortable than any other warmed-up hatchback. Vauxhall has recalibrated the steering for UK-bound cars over the Opel-badged models destined for mainland Europe, sticking to its promise of adding more weight to the rack, but it’s still rather lifeless and lacks the directness that’s ever-present in the Ford Fiesta ST.

For the size of the car, the steering wheel is also a bit too big and can feel quite intrusive, especially given that the seating position isn’t exactly ideal. We’d like to sit a few inches lower to the ground, so you get a real sense of being in the car rather than on it. 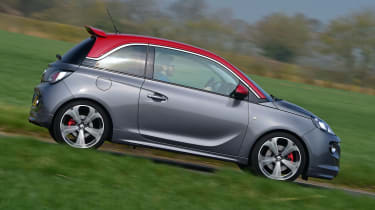 Equally disappointing is that while the Adam’s exploitable nature is easy to extract, you can’t help but feel it has a lot more to give. When you’re paying £19,425 – if you spec the options fitted to our test car – you shouldn’t feel short-changed, especially when there’s a very capable and similarly priced rival from Ford lurking around the corner.

In isolation, there’s no questioning the ability of the Adam S and just how radical the transformation over the standard Adam has been. Yet pitch it against rivals, and its weak spots can be highlighted. 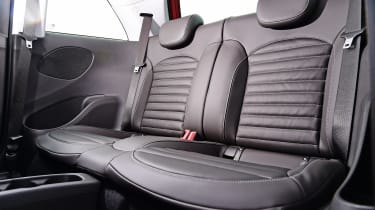 The newcomer may look great, but it’s a strict four-seater due to its cramped rear. Plus, if you spec the £1,610 Recaro bucket seats, which we feel are worth every penny, back passenger space is impeded further.

Stripped down, the Adam remains a city car at heart, so headroom isn’t particularly generous, either. And don’t think Vauxhall has stolen interior space to fit a big boot, as a miserly 170 litres is all you get once you haul your luggage over the tall boot lip.