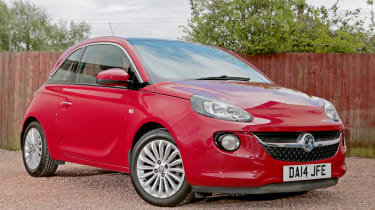 An exclusive Vauxhall might sound like a contradiction in terms, but thanks to the engine and trim level combinations, plus the array of personalisation options, each Adam can be unique. Kit can vary widely, so know what you’re getting; many buyers have specified individual options as well as option packs, so some Adams are very well specified while others aren’t. There’s an element of style over substance with this Vauxhall as it looks smart but only the 1.0T engine offers any real zest, while a cramped cabin means practicality is limited. But at the right price the Adam could be the perfect companion.

When BMW launched its original MINI in 2001 it broke the mould: your supermini no longer had to be ordinary. From then on you could personalise your car and enjoy some luxury without having to buy a large model. It didn’t take long for other car makers to jump on the bandwagon, but Vauxhall didn’t join the party until 2013.

The Adam might have been at odds with the market’s perception of Vauxhall, but in some ways it works rather well. While it isn’t everybody’s cup of tea, owners love or hate theirs with seemingly no middle ground. 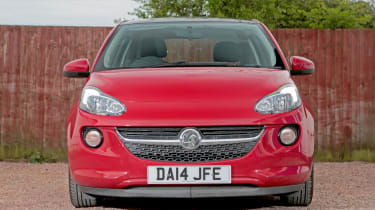 The Adam reached showrooms in January 2013 with 69bhp 1.2-litre or 86bhp and 99bhp 1.4-litre petrol engines. Stop/start was optional and a five-speed gearbox was standard. A 113bhp turbocharged 1.0-litre three-cylinder engine made its debut in the Adam Rocks in summer 2014 and was later offered in the standard models. The Rocks features a raised ride height, off-roader-like looks and bigger wheels. It was available with any of the three engines. In Rocks Air form an electrically operated folding cloth roof was standard.

Just six of the 1,400-plus cars we found for sale used had an automatic box; the manual is nicer anyway. There’s no diesel option and all Adams have just three doors, so it’s a question of choosing which engine and trim you want. The 1.0 turbo is a great engine but costly, so buy a 1.4-litre car; it’s usefully nippier than the 1.2. The entry-level Jam features air-con, 16-inch alloys, Bluetooth, cruise control, DAB radio and a multifunction steering wheel. 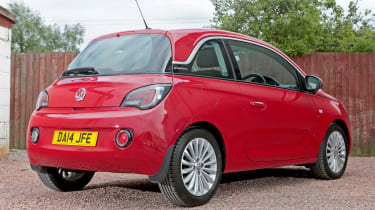 Alternatives to the Vauxhall Adam

The best blend of value and usability in the posh supermini sector comes from the DS 3 (initially branded as a Citroen). This sharp-looking car has some strong engines (including diesels), lots of standard kit and a roomier cabin than the Vauxhall – although it still only offers three doors.

There’s also no five-door Fiat 500, which is now nine years old but still looks great inside and out. The cabin is cramped, however there are petrol and diesel engines, and supply is plentiful with a choice of hatch or cabrio bodystyles – just like the DS 3.

The MINI is the most costly option. It launched the posh small car class in 2001 and has proven unstoppable over three generations thanks to its cheeky design, engaging dynamics and wide model range.

The wiper blades are close to each other and as a result can sometimes get tangled up. This can lead to the linkage being damaged.

Standard headlights on the Adam aren’t great, on dipped or main beam. Replacing the bulbs with H7 xenon units should make a big difference to performance.

It can be tricky selecting first gear because the linkages go out of adjustment. But a switched-on dealer will be able to fix the issues for you.

The rear light clusters on the Adam can mist up after the car has been washed or if it’s raining. The only proper solution to the problem is to fit new clusters. 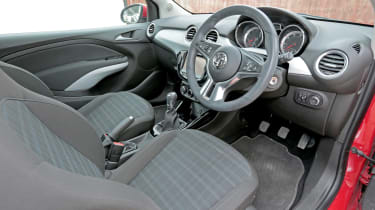 The cabin looks modern and classy, and while the Adam is strictly a four-seater, with lots of room up front for two, the rear seats are cramped, so it’s best viewed as a two-seater. The boot has a capacity of just 170 litres with the seats up; fold them flat and this jumps to 484 litres.

All Adams need servicing every 12 months or 20,000 miles, although this can be brought forward if the oil life monitor indicates an oil change is due. Services alternate between minor (£159) and major (£249).

The fitment of timing chains across the range means there’s no need for a replacement cambelt. Fresh brake fluid is required every two years (£35), while the air-conditioning should be sanitised at the same time (£20). Long-life coolant means there’s no schedule for replacement, but a refill will cost around £49 if needed.

There have been four recalls for the Adam so far, three of which also affected the larger Corsa. Two recalls were because of the possibility of the steering failing; there were two different potential build quality issues, with the campaigns launched in September 2014 and August 2015. 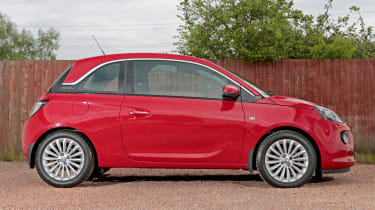 The possibility of 18-inch wheels breaking up while the car was being driven led to a recall in March 2015, while the most recent recall came in December 2015. This was because drivers could lose control if the connection between the steering knuckle and the lower control arm in the front suspension came adrift.

The Adam didn’t feature in this year’s Driver Power satisfaction survey, but did finish in 64th place in our 2016 poll. The highest scores were for the dynamics; handling and ride quality were rated at 37th and 39th respectively. But performance and practicality were the low spots at 111th and 131st.