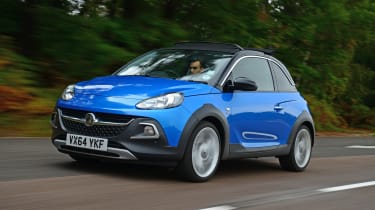 Vauxhall is trying to widen the appeal of its Adam family, but the Rocks Air is not overly successful. The looks are questionable, there isn’t any off-road gadgetry and it’s expensive. The new engine is great, though, and finally gives Vauxhall a place in the three-cylinder petrol engine market.

The small car class is as diverse as they come, but Vauxhall still believes there’s another sector that can be exploited – the supermini with rugged SUV styling. And the Adam Rocks is its first attempt to create the mould.

Vauxhall has found great success with its Adam. Launched last year, the GM-owned British brand shifted more than 8,000 of the little car and it took just 12 months for Opel-Vauxhall to put this pumped-up Adam, called the Rocks Air, into production.

Perhaps pumped-up is a little too strong to describe the Rocks Air’s appearance. Vauxhall has raised the Adam by 15mm for this version and to make sure the car can deal with that height increase, parts of the chassis have been retuned including the dampers, rear-suspension, springs and steering. 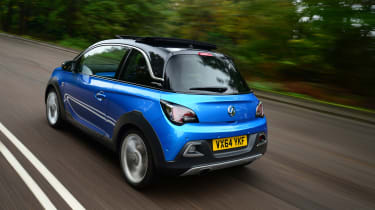 A high ride height isn’t enough though to give the look of a small urban crossover, believes Vauxhall. The dinky car receives a large number of elephant grey plastic panels at the front and the rear which also adorn the wheelarches. Silver-coloured skid plates and trim pieces on the bumpers complete the look, as do LED-tail lights, a rear spoiler and 17-inch alloys.

Vauxhall also wants the Adam Rocks to cut a dash in summer, so there’s an electric fabric roof that rolls back to the C-pillar. It takes seven seconds do its business and can operate at speeds of up to 85mph. Two colours are available and thanks to it folding back to the rear spoiler, visibility is not affected – something that cannot be said of the Fiat 500 Convertible, a key rival to this car. But there’s a large amount of wind noise inside the cabin at motorway speeds despite the roof being made out of a three-layer fabric.

The interesting features don’t stop there, though. The Adam Rocks Air is the first Vauxhall to use the firm’s new three-cylinder 1.0-litre engine with start/stop. With 113bhp and a tiny turbo, it’ll whizz to 62mph in 9.9 seconds, return 55.4mpg on the combined cycle and emit 119g/km of CO2. Top speed is 121mph and road tax is free for the first year and £30 thereafter. 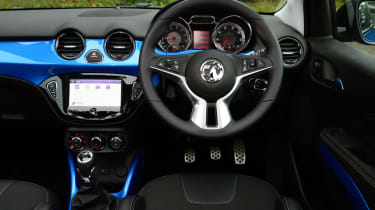 On the road the jacked-up stance makes its presence known. Show the Adam Rocks Air a country bend and it wobbles around with little grace, and our test car’s 18-inch wheels made for a choppy ride. That said, the engine is strong and the six-speed gearbox is smooth.

Just like the hard-topped, non-crossover Adam, the Rocks Air can be personalised to buyers’ exacting tastes thanks to a large trim and colour options list, but these can bump the price up quite a bit. Our test car with its Let it Blue paintwork, Back to Black roof, a number of options packs and, curiously, Union Jack badges, pushed the 1.0-litre car’s £16,695 list price up to an eye-watering £19,635. By comparison, you can step into a brand new 189bhp MINI Cooper S, admittedly before options, for around £1,000 less.

The Adam Rocks Air is an interesting proposition, but the competition is hard to ignore – especially the normal Adam which is roughly £1,300 cheaper.