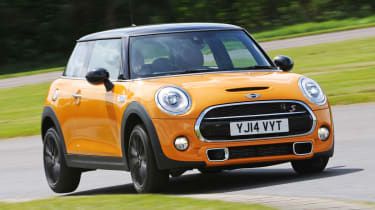 The MINI Cooper S is punchier, faster, cleaner, more planted and better equipped than before – and all for just £400 more than the old car. But we would recommend the three-cylinder-engined Cooper instead. It’s  not as fast, but it’s still a fun, grown-up drive with lots of character – one of the key reasons for buying a MINI in the first place.

Until the MINI JCW arrives later this year, the MINI Cooper S is as hot as the all-new MINI hatchback family gets. Unusually, the new S has an upsized engine – ditching the 181bhp 1.6-litre turbo unit co-developed with PSA, in favour of BMW’s own 189bhp 2.0-litre.

The claimed 0-62mph sprint for the six-speed auto we tested drops by half a second to 6.7 seconds, and the new engine develops 280Nm of torque from just 1,250rpm, up from 240Nm.

Press the new, plectrum-shaped starter switch, and the engine burbles into life. A press of the accelerator confirms that the MINI feels punchier, more ready to take on a decent road than before. Acceleration is brisk, with much more alert response from the lower end of the rev-range.

The engine noise builds in a smooth, flat way, rather than a roar; but slide the switch around the base of the gear lever into Sport, and you get the trademark pops and splutters that burp down the exhaust when you lift off the throttle. 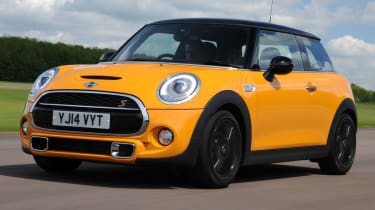 The steering is a bit artificial in feel, but has a decent weight to it – especially in Sport mode. Turn-in is lovely and sharp, and there’s much more grip than in the old car from both the front and rear tyres. It makes the MINI feel like a bigger, more stable car – certainly more grown up, which is no doubt due to this platform underpinning BMWs in future.

There’s still some squirm through the wheel under acceleration, but compared to the old car, which felt like its wheel was connected to the front axle by an angry snake, it’s a big improvement.

The ride is less convincing, however. MINI is keen to play up the car’s go-kart handling, which is a fair claim. But to achieve this, the Cooper S’s suspension is really firm. The damping is good, doing just enough to make potholes feel like bumps in the road, but it makes the MINI uncomfortable on a long drive, and fidgety around town. The 17-inch alloys fitted to our test car don’t help, either.

The all-new gearbox isn’t a great match for the Cooper S. It’s a torque converter auto, which never seems to be in the right gear. At least it responds quickly to manual shifts from the wheel-mounted paddles and helps improve efficiency over the old gearbox thanks to a coasting feature and stop/start.

Visibility is pretty good, despite the car’s letter-box windscreen, and it’s easy to place on the road. The standard-fit sports seats are also better than before, with more support for the upper body, which helps when you’re cornering hard.

The interior is better than before, but it still takes a while to find all the buttons and switches. A new feature is the LED ring that runs around what used to be the central speedometer.

It mimics the rev counter normally, but changes colour when you adjust the heater or change the driving mode, and adds a hint of modern flair to a design still rich with retro overtones. 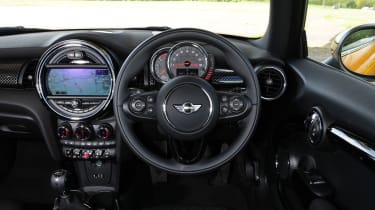 Boot space is still pretty poor, at just 211 litres, but you can now raise or lower the boot floor depending on your needs. You can also make the rear seats more upright to increase boot space.

Keyless go is standard on all models but the S also gets sports seats, air-con and DAB radio. A set of 16-inch alloys is also included, though our car had 17s.