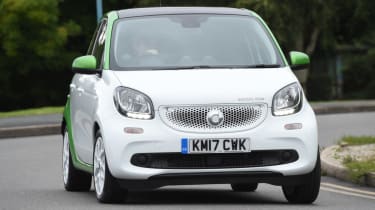 The Smart ForFour is a fun companion around town, with zippy performance, eye-catching looks and a tight turning circle. However, the poor real-world range and lack of widespread support for fast charging mean that this is a car limited to life firmly within the city. Plenty of rival small EVs now offer ranges far beyond that of the ForFour ED’s official 96 miles to fit into modern urban lifestyles.

While we’re waiting for Mercedes to launch its all-electric ‘EQ’ sub-brand, the firm’s Smart division is getting on with the job by launching brand new, electrified versions of its ForTwo and ForFour city cars.

This is the first time we’ve tried the second of those models on UK roads. It’s in showrooms now, starting from £16,915 after the Government plug-in grant. 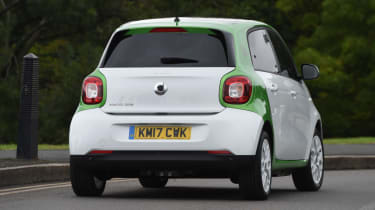 That sticker price means the ForFour Electric Drive is a more expensive option than basic versions of the Renault ZOE and Nissan Leaf. It still looks steep on a monthly PCP deal, too; the representative quote of £269 per month puts it way beyond the ZOE.

Around town, the combination of electric power with Smart’s city car know-how works well. The healthy 160Nm of torque means the ForFour ED feels nippy – highlighted by a 0-37mph time of 5.5 seconds.

The steering wheel feels very light in the hand and twirls quickly to cut the Smart ForFour ED’s turning circle to 9.05 metres. Ride quality and body control are good enough, too, but the optional 16-inch wheels can unsettle things over bigger bumps and potholes. The fittings in the cabin are carried directly over from regular versions of the ForFour, with the exception of the pod dials on the dashboard for charge and power usage. It means that the interior feels modestly upmarket with a decent combination of robust materials. The infotainment system is slick, and the sat-nav system is basic but easy to use. 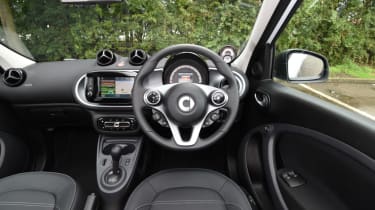 So the ForFour ED feels set up for life in the city – but sadly, the suburbs are as far as you’ll get, thanks to short range and slow charging tech. Smart claims an official figure of 96 miles, which is less than half the official range of the updated ZOE. And our test car delivered only 65 miles of juice on board when charged to 100 per cent.

As of now, the ForFour ED supports the 7kW charging standard at best, meaning that the 17.6kWh cell takes 2.5 hours to charge to 80 per cent. Smart says the car will be updated to the 22kW standard in 2018, but for now it’s hard to imagine doing any moderate journeys in the ForFour ED.