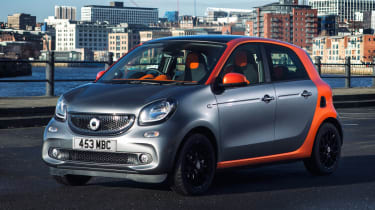 Ever since Mercedes subsidiary Smart burst on to the scene in 1998, it’s done its best to offer something different. The firm’s first car was the two-seater Smart Coupé (later known as the ForTwo), while the Mk1 ForFour injected some extra design flair into the supermini segment with its quirky styling and two-tone paint schemes. When the smaller, city-car-sized Mk2 arrived around a decade after its forebear, it offered more of the same: something a bit different in a segment that’s not short of talented – but ultimately rather conservative – rivals.

Perhaps it’s Smart’s relatively low profile, or maybe it’s the car’s quirkiness, but it hasn’t sold as well as most rivals, although that’s not a reason to avoid it as a used buy. 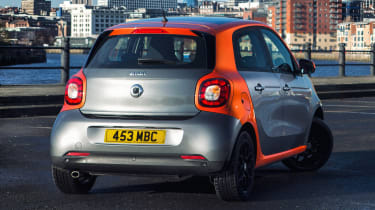 The Mk2 ForFour reached the UK in March 2015 with a choice of 70bhp naturally aspirated 999cc or 89bhp turbocharged 898cc engines; both were rear-mounted three-cylinder units. Buyers could choose a five-speed manual or six-speed dual-clutch auto gearbox (the latter called Twinamic) alongside Passion, Prime, and Proxy trims.

A revised ForFour range arrived in September 2016, with Prime Sport and Brabus Sport trims added, and Proxy dropped. A month later the auto-only Brabus and Brabus Xclusive arrived with a 108bhp 898cc engine, sports suspension and sportier styling. The Xclusive brought leather sports seats and upgraded interior trim, automatic lights and wipers, plus a rear parking camera. In July 2017 a new entry-level Pure model was introduced, alongside the EV ForFour Electric Drive (renamed EQ in 2018), which has a 100-mile range.

The smaller, turbocharged engine is the pick of the bunch, but the 1.0-litre unit is fine if you’re in no hurry. Unlike previous Smarts, the ForFour’s automatic transmission is reasonably slick, although not as good as some dual-clutch gearboxes. 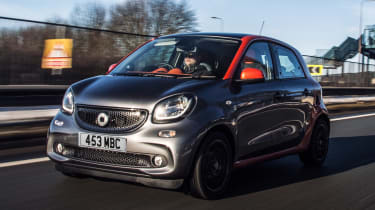 Alternatives to the Smart ForFour

The now-defunct Renault Twingo Mk3 is mechanically the same as the Smart ForFour, and used prices are similar – it’s certainly worth a look if you like the styling.

More conventional, front-engined rivals include the Kia Picanto and its cousin, the Hyundai i10, which have a big-car feel and come packed with equipment if you avoid entry-level models; top-spec cars even get a heated steering wheel. The Volkswagen up!, SEAT Mii and Skoda Citigo are three versions of the same car which arrived in 2012, yet they’re still desirable thanks to their relatively roomy cabins, good build quality and nippy 1.0-litre engine. The Citroen C1, Peugeot 108 and Toyota Aygo are three more city cars with the same oily bits; they’re plentiful, top value and cheap to run.

The rear door’s windows don’t wind down as in most cars; instead they’re side-hinged and can be popped open to let air in.

The electric ForFour will rarely offer more than 80 miles of range on a single charge; in winter, it’s not unusual for this to drop to 60 miles.

The gearchange can be notchy. This is typically because the linkage goes out of adjustment, but it’s an easy fault to fix.

The ForFour might be small but it has back doors, which improves rear-seat access enormously. Seating is strictly for four, but the car’s practicality is boosted by a fold-flat front passenger seat to help stow long loads; the lack of oddments space is disappointing, though. Thanks to the rear-mounted engine, the boot floor is quite high (and it gets warm), and there’s nowhere to stow a spare wheel. 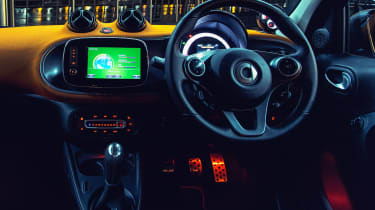 The ForFour comes with a three-year, unlimited-mile warranty; the Electric Drive gets an eight-year battery guarantee. Dealers were unable to provide us with servicing costs; independent Smart and Mercedes specialist Simon Light (simonlight.co.uk) charges £125, £175 and £250 for the 12-month/12,500-mile A, B and C services. Replace brake fluid after three years, then every two. There are no cambelts to replace.

The Mk2 ForFour has been recalled three times. In October 2016, 49 cars built in April 2016 could have a faulty gear selector that prevents Park from being engaged. A September 2017 recall for defective handbrakes affected 9,181 cars made from April 2014. In October 2017 1,878 Smarts built between March and June 2017 were recalled for a steering joint issue.

No Smart models appear in our Driver Power surveys, so the best guide as to what owners think of their cars is in the readers’ reviews section at sister title Carbuyer, where owners give an average score of just 3.1 out of five. Poor fuel economy, dim headlights, a hot boot, variable build quality and various design flaws are the things that bug owners the most.