Smart's ForFour city car gets the hot Brabus treatment, so we take it for a spin 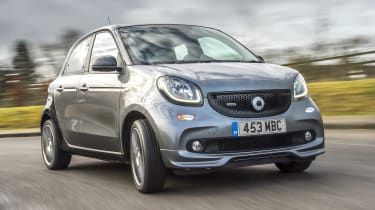 The Brabus ForFour may be characterful, but there’s no getting around its obvious flaws. The styling upgrades give it real personality, and it’s entertainingly agile around town, yet it leaves a lot to be desired against more capable hot hatch rivals. The powertrain is pretty underwhelming, while the handling doesn’t entertain or inspire like a souped-up small car should. When all is said and done, this is a not-so-hot city runabout for the price of a well-specified Ford Fiesta ST.

Brabus is a German brand with a long and illustrious history tuning a huge variety of Mercedes models. Many of them have been extremely fast, loud and expensive, but 16 years ago Brabus surprised us by setting up a joint venture with city car maker Smart.

The Smart Brabus ForTwo is now in its third iteration, while the ForFour you see here is the second four-seat model to emerge from the partnership. It shares much with the new Renault Twingo GT, including the familiar 0.9-litre turbo engine tweaked to deliver 107bhp thanks to boosted fuel pressure, a revised air intake and sports exhaust system. There’s also a useful 35Nm of extra torque.

Unfortunately (and unlike the Twingo GT) Smart has chosen not to offer a manual gearbox with the Brabus, meaning you’re stuck with a six-speed dual-clutch automatic. Memories of the sluggish and horribly jerky shifts of old auto-only Smarts come flooding back, but thankfully this unit is considerably smoother and quicker than before. 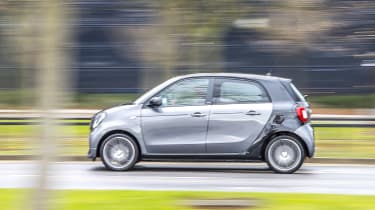 There’s decent response from the wheel-mounted paddles, while a 40 per cent faster shift and Race Start launch control function give it a sportier edge. It all means the Smart is a breeze to thread around town, though there’s nothing like the sense of interaction you’ll have with a manual gearbox.

This isn’t helped by the engine itself, either. It’s nippy around town, feeling notably more perky than the standard ForFour, but it never feels fast out on the open road. It’s 100kg heavier than the ForTwo, and also feels unwilling to rev, meaning you find yourself changing up early to make the most of the torque.

It retains the characteristic thrum on start-up, but once on the move the sound is disappointingly muted. Unlike in the ForTwo, the new exhaust has very little effect in the four-seat Smart, and at motorway speeds the rev counter is the only indication of how hard the engine is actually working. Our test fuel economy of 37mpg shows it's not especially economical, either. 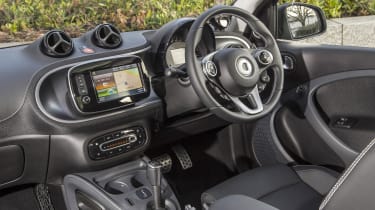 It’s a shame, because the Brabus additions extend to more than a power boost.  Firmer suspension, recalibrated variable ratio steering and a slackened ESP system aim to provide more fun at the wheel. It feels tauter and more composed than a standard Smart in fast corners, but loses none of the almost comic agility and that tight turning circle that standard car is famous for. The weightier steering still lacks any sort of feel, however, and with understeer the default handling trait there’s still no sense of the ForFour being rear-wheel drive.

The ride isn’t as stiff as you’d expect, though, especially when you take a look at those 17-inch wheels. Nevertheless, this is still a car that crashes into big potholes and bounces over high speed bumps – a MINI runs rings around it in this regard. There’s incessant tyre roar, too, and wind noise is a problem at speed. 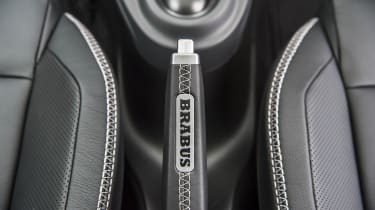 We’ve no complaints about the funky styling, however. Brabus has brought just the right amount of sportiness with the big wheels, twin pipes and chunky bumpers – without going over the top. Quality is good inside, too, plus our Xclusive model comes with plenty of kit.

That’s the least we expect given the price; The Brabus ForFour starts from an already questionable £16,815, but this car is nearly £20k before options. That sort of money would give you the pick of a number of more practical, nicer to drive and far faster hot hatches.