Down tools, the Smart is back on the road! Our ForFour has endured a turbulent couple of months... and only now is it up to full strength 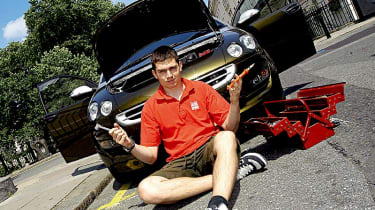 Down tools, the Smart is back on the road! Our ForFour has endured a turbulent couple of months... and only now is it up to full strength again. As we first reported in May, the ForFour had an undiagnosed fault. At 30mph and above, a low-pitched humming sound was audible over the usual engine, tyre and wind noise.

We took the hatch into Smart's aftersales centre in Brentford, west London, where technicians spent the day trying - and failing - to find the problem. Even though they claimed the car had a clean bill of health, the noise was still heard by several different drivers and passengers. The only answer was to get a second opinion from another workshop.

So a few weeks later, when visiting family in the Midlands, I called into the firm's Wolverhampton site, which shares facilities with a Mercedes dealer. Initial impressions were good, and a polite technician drove our Smart, with me as a passenger.

Within minutes, he heard the mystery sound, and said he recognised it. The diagnosis was confirmed on a ramp in the workshop, when he delivered the alarming verdict that KP54 VEB needed a new gearbox! The good news was that a fresh transmission was fitted within three days - just in time for me to return the following weekend to pick up the car.

But even with a replacement box, the ForFour was as noisy as ever. Only after further investigation did the mechanics discover the fault was a rear wheel bearing - which was what we'd suggested two months earlier! One needless new gearbox and several man hours later, we had a quiet Smart once again, thankfully paid for under warranty. The garage even stumped up for my train fare from London to collect the five-door.

So has the car made its last trip to the garage for now? Unfortunately not. During its time in Wolverhampton, the on-board computer decided a service was due earlier than expected.But why didn't the dealer take the initiative and do the check-up then? We now have to wait for a free slot at Brentford.

All this has taken the shine off Smart ownership. The ForFour is still a stylish and economical supermini, yet niggles include the lack of a parcel shelf and a gearbox which is a pain in traffic. Once it's serviced, maybe we'll learn to love the car again - but for now it's definitely in the doghouse.

While I couldn't help being drawn to the ForFour's cute looks, the gearbox soon became frustrating. Its laboured, jerky changes made it hard work in town, which is unacceptable in a small hatchback. The interior will appeal to the style conscious, but I think the dash materials already look a little dated. It's really frugal, though.Marc Mustard, staff writer