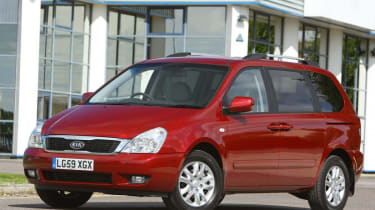 The Kia Sedona is the company’s traditional seven-seat people carrier, and it rivals the Chrysler Grand Voyager in terms of price and space. The big, boxy lines mean there’s lots of space inside, while sliding doors mean access to the back seats is easy in the tightest of spaces. Power comes from a large capacity 2.2-litre diesel, and while it’s not the most efficient engine around, it has enough power to haul a full complement of passengers and their luggage. However, the Sedona is something of a throwback to the pre-Cee’d era: it’s not as well built as the firm’s most recent offerings, and feels cheap inside. On the plus side, you get a lot of car for your money, and it’s still covered by Kia’s industry-leading seven-year warranty.

Again, you don’t buy an MPV for a back-roads blast, and the Sedona is about as unexciting as it gets. It goes, steers and brakes without fuss, which is just what you need if your seats are filled with kids. The 2.2-litre diesel is powerful enough to cope with heavy loads, but it can be a bit gruff when accelerating, and the five-speed gearbox means motorway cruising isn’t quite as relaxing as it could be.

List prices for the Kia Sedona are competitive: they start from £20,000, which is around £10,000 less than the entry-level Chrysler Grand Voyager. In fact, there’s no other car that can offer as much space for the money. The 2.2-litre diesel is getting old, and economy and emissions lag behind the latest engines from rival makers. An emissions figure of 179g/km isn’t much better than the 189g/km returned by the most powerful petrol Ford Galaxy.

You’d be hard-pressed to get excited about a boxy MPV, and the Kia Sedona sticks to the simple formula. The last facelift gave it Kia’s corporate nose, but overall it’s a simple design, and the grooves in the rear panels for the sliding doors don’t do much to help its looks. Inside, there’s not much to get excited about, either. The dashboard is basic, and cheap plastics do nothing to add to its appeal.

This is the Kia Sedona’s strongest category. There’s seats for seven, while that vast van-like body means there’s lots of leg and headroom throughout the cabin. What’s more, there’s 214 litres of boot space with all seven seats in place, which is better than a Chrysler Grand Voyager. All the seats fold flat, creating a maximum of 1,770 litres to play with.

The Kia Sedona has been on sale for a while now, so any problems will have been ironed out. It comes with airbags, Isofix child seat anchors and electronic stability control as standard. The best part is that, as with all new Kias, the Sedona comes with a seven-year, 100,000-mile warranty, which gives added peace of mind. 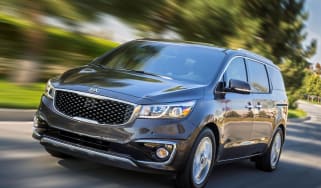 Kia has unveiled the all-new Sedona ahead of a global debut at the New York Motor Show, but it won't be coming to the UK
Large MPVs 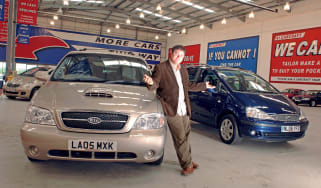 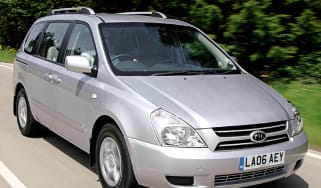 Kia lacks the brand name to pull people into the showrooms, so it sells on price and equipment.
Kia Sedona 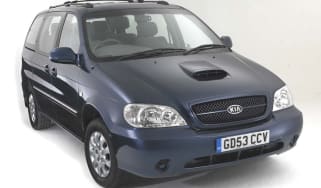 Plenty of space, lots of kit and great reliability, this MPV is a fine used choice...
Kia Sedona 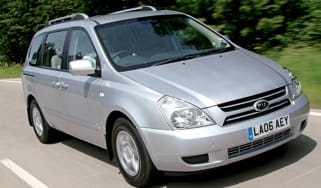 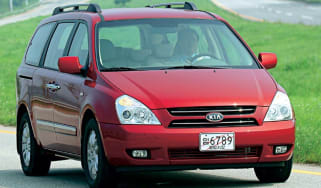 Britain's top-selling budget MPV is back, and with a new look the maker says will finally propel it into the big time. Auto Express is the first magaz…
Skip to HeaderSkip to Content