Britain's top-selling budget MPV is back, and with a new look the maker says will finally propel it into the big time. Auto Express is the first magazine to drive the freshened-up Kia Sedona, which replaces a car that sold 139,830 examples in 2004. 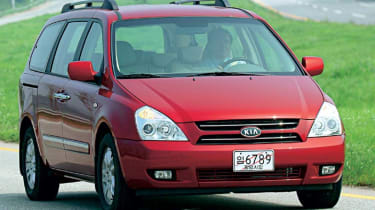 Short of buying your own bus company, there are few better ways of transporting large numbers of people across the UK's motorway network. While this 11-seat Sedona won't make it to the UK market, few rivals offer the revised Kia's blend of practicality, space and comfort at such a low price. The newcomer has a very bright future.

Britain's top-selling budget MPV is back, and with a new look the maker says will finally propel it into the big time. Auto Express is the first magazine to drive the freshened-up Kia Sedona, which replaces a car that sold 139,830 examples in 2004.

To help make this year even more of a success for the big people carrier, there's sharp styling, an upmarket cabin and more luxury, with electric windows, mirrors and seats, air-conditioning and a high-end stereo system as standard.

Key visual changes include a revised nose, larger Kia badging and a new-look radiator grille. Chunky chrome door handles add a touch of class to the flanks, while there are new, more modern alloy wheels, too. Overall, it's a car that looks prouder than ever to wear the Korean marque's badge.

Under the bonnet, extra power is on offer. Our test model is equipped with the manufacturer's 2.9-litre CRDi diesel, and improvements to this popular four-cylinder 16-valve unit mean it now gives 170bhp at 3,700rpm - up 5bhp. Maximum torque has climbed to a useful 353Nm from only 2,000rpm. In-gear acceleration is strong, and the five-speed automatic transmission relatively slick. However, given its size and weight, the Kia takes an age to complete the sprint from 0-60mph, while the gearshifts could be smoother, and the engine quieter.

Once at cruising speed, it's a very different story, with impressive refinement and comfort showing why the Sedona has a legion of fans. Thanks to revised damping - with a MacPherson front strut and multi-link suspension at the rear - the front-wheel-drive MPV feels more secure, particularly in tight corners. Yet the ride is still surprisingly supple, and the car absorbs the imperfections of uneven roads with ease.

But what impresses most about the new Sedona is its interior. Our test car, driven in Kia's home market of Korea, not only wears different badges to the UK version - it's known as the Grand Carnival - but also has a different cabin layout. The new two-tone colour scheme is a big improvement over the previous machine, and with 11 seats boasts an absolutely vast carrying capacity.

Each chair is trimmed in leather, with the driver's seat electrically adjustable in five directions. Front occupants get the most space, although both second and third rows offer plenty of legroom. It's the fourth row - the bench, which won't make it to UK cars - that's least comfortable. Passenger space is tight, and while the bench folds away, it takes up most of the luggage area!

Thankfully, there's some cabin versatility; the second row folds to provide a table for the third row of seats, while storage cubbies are in plentiful supply. But the car can't match the adjustability of MPVs in the class below, such as the Vauxhall Zafira and Honda FR-V.