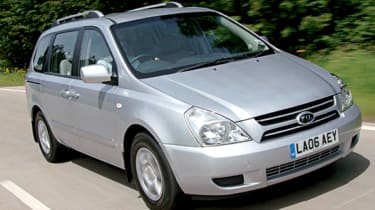 The new Sedona will further boost Kia’s reputation for offering high-quality cars at low prices. The new MPV is one of the cheapest ways to carry seven passengers in comfort, while the powerful, if not especially frugal, diesel knocks spots off similarly priced rivals. However, we would avoid the automatic gearbox and go for the manual model instead.

Forget the Renault Espace, or even the Chrysler Grand Voyager – this is the real people carrier for the masses! The original Kia Sedona found more than 31,000 customers in the UK, because it offered space for seven in a package that cost little more than a Ford Focus. And while more expensive rivals focused on luxury, the Sedona built an enviable reputation as a reliable family workhorse.

Now Kia is hoping to strengthen the MPV’s appeal with a more sophisticated replacement. A long-wheelbase 11-seat version is available in some markets, but it’s the seven-seat Sedona that arrives in the UK on 1 July. Prices start from £16,000 for the entry-level 2.7-litre V6 petrol model, but the biggest seller will be the updated 2.9-litre diesel, costing from £17,500.

That’s £750 more than the old oil-burner, but some significant changes have been made. First is the design, which has a more angular look, with SUV styling touches at the front and rear. Roof rails, chunkier pillars and shorter overhangs toughen the profile, and the Sedona rides on wider tyres.

The overall length shrinks by 120mm, which helps improve the car’s handling and manoeuvrability, but the car is wider, so there’s more space in the cabin. It’s certainly roomy – adults sitting in any of the five individual rear seats will have plenty of leg and headroom. The sliding side doors are electrically operated in top-spec models, and they provide good access. Rear air-conditioning and individual roof vents round off the experience for occupants in the back.

All the rear seats slide, tip or can be removed completely – but what they don’t do is disappear into the floor. The Sedona uses the same platform as the Magentis saloon, and the ride on rough roads is impressively smooth. The new people carrier also boasts a tight turning circle, which can be improved even further by pressing a button to change the speed of the steering rack.

There’s a five-speed auto available for an extra £1,100, but we would stick with the manual instead, as it is more suited to the torque of the 182bhp diesel powerplant.

Standard kit is good, with six airbags, air-con, electric windows and an integrated CD player. The mid-spec LS model, which costs £19,500, replaces the black plastic dash with a metal effect finish, but classiest of the lot is the £21,500 TS, which comes with leather trim. Even at that price, the Sedona remains an MPV for the people.