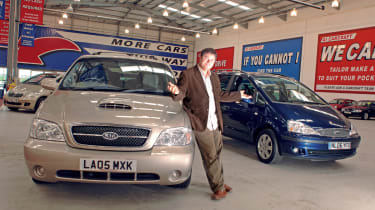 If you are after the maximum space for the minimum cash, the full-sized MPV class has to be the place to look.

The bottom fell out of this market years ago. Smaller models stole the larger vehicles’ thunder, thanks to their car-like dynamics, versatile seating layouts and glitzy extras such as panoramic windscreens and under-floor cubbyholes. So, big second-hand people carriers are now dirt cheap!

Yet if you require space for more than a couple of kids and a decent boot, there’s nothing this side of a minibus to beat a full-sized people mover. This week, I’ve picked two of the best money can buy – and look at how much metal you get!

The Kia Sedona needs little introduction. It’s the reigning sector champ in Auto Express’s Used Car Honours, and has been for the past three years, due to its huge cabin and excellent value for money. Lining up against it is the Ford Galaxy. When it arrived in 1999, the blue oval’s MPV set the benchmark for handling and practicality, and is now cheaper than ever. But can it out-lug the crafty Korean?

What you get Both of these cars provide acres of space inside, plus more cup-holders than Tiger Woods’ trophy cabinet – so what sets them apart?

Well, the Galaxy is probably the better looker of the two. But you have to ask yourself if you prefer style or substance, because the Kia trumps the Ford for access.

The Sedona’s practical sliding rear doors really come into their own in crowded car parks, where it’s enough of a job just to park a super-wide people carrier, never mind open the doors and squeeze out! Add a trio of kids to the equation, and you can see how useful these doors can be.

The Kia is also generously equip-ped, and every model comes with air-conditioning as standard. SE trim gets you alloy wheels, leather upholstery and an electric sunroof into the bargain. However, on the downside, the big Kia managed to score only two stars in Euro NCAP crash tests; the Galaxy wasn’t assessed.

Prices To see how demand for these giant family models has fallen, you only have to look at their prices. One of the MPV specialists I contacted was so fed-up, he’s stopped selling them altogether! He used to have up to 20 in stock, but he’s replaced them all with sports cars and prestige saloons. So, how cheap have they become? Well, the Kia predictably costs less than the Ford. Prices start at £4,000 for a decent 1999 V-reg 2.9-litre diesel. That should be enough for a 70,000-mile car.

For the same sort of money, you’ll be looking at an original shape 1998 S-plate Galaxy with an even higher mileage. The 2.8-litre V6 version is even cheaper, but unless you want to become best mates with your local petrol station staff, you should steer clear. Second-generation diesels start at more than £5,000 from dealers.

The Sedona CRDi is the only oil-burning option in the Kia, and models with an automatic box cost £400-£600 more than manuals – but the self-shifter is worth every penny.

Problem points When it comes to people carriers, there are some things you should check regardless of the make and model you’re buying.

For a start, they all feature trick seating mechanisms, so ensure these work properly: check all the chairs fold, release and re-attach correctly – this is also because pews in older MPVs can be seriously heavy, and they’ll be useless if you can’t even lift them out! It’s worth counting them all, too, because they can go missing – there must be loads of garages across the UK with odd MPV seats buried under a pile of junk.

It also goes without saying that interiors tend to take a bit of a battering – and while a professional valet can do wonders for carpets and upholstery, it’s worth looking out for broken and badly scuffed trim.

If you’re buying a Sedona, check for unsightly rust around the seams in the body and floorpan, as well as behind the rear number plate. Carry out an emergency stop on the test drive as well, because a software fault can lead to over-eager ABS.

A number of common ailments also affect the Ford; these include perished brake servo pipes and failed wiper motors. As there’s so much glass, tem-peratures inside can get uncomfort-able, so make sure the air-con is work- ing – the system can be temperamental, and sitting in a motorised green- house is no fun when the sun’s out.

Steer clear of any car with a whining manual box, and watch for un-even running on Galaxy TDIs – this is caused by failed air mass flow sensors.

Verdict Both of these MPVs were replaced last year, but late examples are still pricey – and still vulnerable to heavy depreciation. So, three-year-old models represent the best buys.

Pick either of these two giants and you’ll be laughing – but for me, this sector is all about one thing: value. If you need to buy a full-sized people carrier, then the chances are you’ve got lots of kids – and in my experience, they will empty your wallet faster than a broken cambelt!

That being the case, the Kia is my top choice. It doesn’t drive quite as well as the Ford and its diesel can be coarse, but it has plenty of go, loads of space and shouldn’t let you down.