Plenty of space, lots of kit and great reliability, this MPV is a fine used choice... 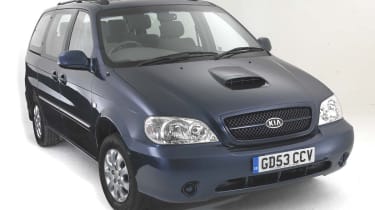 If there’s a full-sized people carrier that offers better value for money than the Kia Sedona, we have yet to find it! Having beaten its closest rivals in the Auto Express 2006 Used Car Honours, it’s now been our favourite second-hand MPV for three years running, and with good reason.

Not only is Kia’s seven-seater one of the most practical and spacious on the market, but it’s also affordable. Better still, most used examples are well equipped and extremely reliable. Put simply, it’s a brilliant all-round package that’s very hard to beat.

Although petrol Sedonas are cheaper to buy than diesel ones, the running costs are significantly higher due to their inferior fuel economy. Pre-2002 cars are also pricier to keep on the road, as they need servicing nearly twice as frequently as later models. It’s worth seeking out an example with a DVD player, and don’t be put off by the idea of an auto – it makes light work of urban driving and, when mated to the diesel engine, doesn’t have all that much effect on the fuel consumption figures.

PAM Beamond from Stone in Staffordshire thinks her 51-reg Sedona 2.9 CRDi is a fantastic all-round package. She has owned it for nearly four years. “I bought it as a one-year-old car, and for the money nothing else could touch it,” she said. “I take it to France every year, and it just swallows everything. Yet it’s cheap to run, very comfortable and the dealer service has been excellent. It’s a bit noisy, though, so I am hoping to trade up to one of the 2006 facelift Sedona models after they have been out for a year or two.”

Rust: look out for rust, which breaks out in the seams and floorpans as well as behind the number-plate surround. It’s likely to be more unsightly than structural, but it will only get worse, so avoid cars showing evidence of the tin worm.

ABS: take any potential buy for a test drive and brake hard from a low speed to see if the ABS interrupts before the Sedona has actually started to slow. Due to a software fault, you may find the anti-lock function cutting in.

Bearings: while you’re on the road, listen out for grinding noises when you drive round corners. The wheel bearings can fail prematurely and, while any faulty ones should have been replaced by now, it’s still worth checking them out.

Oil pressure: make sure the oil pressure warning light goes out when you start the engine. Some cars were fitted with a faulty oil-pump strainer, which should already have been renewed. If it hasn’t, the tell-tale sign could stay lit.

Interior: people carriers that have been used for transporting families have often led a hard life, and it shows. Check the trim for signs of abuse, and make sure you spot any ripped or stained upholstery. Any such problems can be resolved as part of the deal.

As a category winner at the Auto Express Used Car Honours, the Kia’s strengths are well documented. Major weaknesses are its gruff-sounding diesel engine and the hard interior plastics. For families on a budget, though, it reigns supreme as the ultimate used buy. Steer clear of the thirsty V6 and the Sedona is an affordable full-sized MPV with the added benefit of sliding rear doors. What it lacks in style, it makes up for with a practical and sturdy cabin. WE LIKE the spacious cabin, affordable prices, decent reliability and high standard and equipment levels. WE DON'T LIKE the poor quality plastics in interior, rough-sounding diesel powerplant, thirsty petrol engine and two-star Euro NCAP overall rating.

RECALLSNov 2003: Software for ABS on cars that were built between November 2002 and March 2003 gets upgrade. Sept 2005: Possibility of rear wheelbearing failure on all Sedona models which were manufactured between June 2003 and October 2004. Sept 2005: Engine seizure may occur because of oil-pump problems. Only diesel Sedona variants built from July 2004 to August 2004 affected. Mar 2006: Small chance of an electrical fire breaking out on examples with powered seat adjustment.