Kia has unveiled the all-new Sedona ahead of a global debut at the New York Motor Show, but it won't be coming to the UK 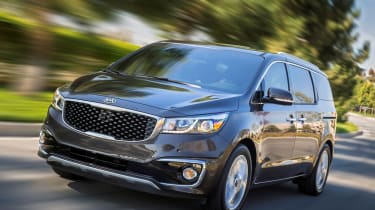 This is the new Kia Sedona, officially revealed ahead of its debut at the New York Motor Show this week. As suspected, the mid-size MPV has been given a radical design overhaul following teaser images released earlier this month.

Up front, the revised front fascia is more pronounced, featuring Kia’s trademark ‘Tiger Nose’ grille, which merges with the raked-back headlights. The rear also gets an updated look, with new horizontal taillights now integrated into the boot lid and echoing the wraparound design at the front. A bumper guard and roof spoiler also adds a sportier dimension.

The new Sedona is also more angular than its predecessor, and benefits from a sleeker profile with reduced front and rear overhangs. The wheelbase is almost 41mm longer than before, helping create an airier cabin with improved driver visibility.

Inside, there’s room for either seven or eight passengers depending on the configuration, as well as a range of storage options. Customers can also spec Kia’s ‘First Class’ lounge seating for the middle row, which comes with retractable leg rests and can slide backwards for added room.

The new look continues inside, with the Sedona gaining a distinctive and sophisticated layout. The interior comes in a choice of three colours, while the new flagship SXL model is trimmed in Nappa leather as standard.

There’s a revised version of Kia’s next-generation UVO Infotainment system, too, which now includes driver aids such as Geo-fencing, Speed Alert, Curfew Alert and Driving Score. Kia’s App store is also available, allowing drivers to download content from iTunes or Google Play for use within the car.

Kia has also replaced the previous generation's 3.5-litre V6 with a more powerful 272bhp 3.3-litre GDI V6 petrol engine, twinned with a six-speed automatic gearbox. A range of diesel CRDi engines are also likely to be made available. The chassis is also stiffer, with Kia claiming it's 36 per cent greater than its closest segment competitor.

There are currently no plans to bring the new Sedona to the UK, but it is to go on sale in the US later this year, with prices to be announced closer to the launch date.