Is firm’s new budget city car on to a winner? 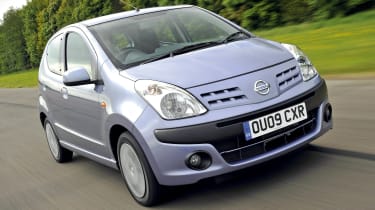 With competitive prices and low running costs, the simple and uninspiring Pixo is the motoring equivalent of a domestic appliance. Entry-level Visia trim will grab the headlines thanks to its sub-£6,000 price, but the mid-range Acenta at £6,745 is arguably more appealing.

Small cars with microscopic running costs are big news – so the Pixo couldn’t have arrived at a better time for Nissan.

With a 1.0-litre engine that produces CO2 emissions of only 103g/km and starting prices from as low as £5,995, it ticks all the low-cost boxes.

And if you think the Pixo looks familiar, it should, as it was developed with Suzuki and shares most of its bodywork with the Alto.

When it officially goes on sale at the start of June, it will be the first model in the Nissan line-up to wear the new Pure Drive badge, which highlights the firm’s lowest CO2 models. But is the Pixo compromised by its low cost environmental billing, or does it hit the green car bullseye?

Look at the spec sheet, and our-top-of-the-range Tekna model is on target. At £7,645, it costs considerably more than the entry-level Visia, but comes complete with air-conditioning, six airbags, electronic stability control and remote central locking as standard.

From the outside, though, it’s hard to get excited, because the Pixo’s big headlamps and Note-style grille leave it trailing its Suzuki stablemate in the battle for kerb appeal.

Inside, the Nissan is virtually identical to its sister car, and shares the Alto’s basic feel. It’s clear that the Pixo has been built down to a price, with hard plastics and simple switchgear. In the back, you get pop-out windows and a small 129-litre boot. Plus, with only two seatbelts in the back, the Nissan is strictly a four-seater.

The budget feel doesn’t disappear on the road. The snappy gearchange and characterful three-cylinder engine are pleasant enough, but performance is lethargic and the Pixo is noisy at speed. The soft suspension also thumps into potholes around town, and the steering lacks precision.

This newcomer appeals most to the wallet. Claimed economy of 64.2mpg and a group B road tax rating promise to keep running costs to a minimum.

Rival: Kia Picanto 1.0 Few rivals can match the price of the entry-level Pixo – but with their latest promotion, the value-for-money experts at Kia can. The 1.0-litre Picanto costs £5,995, and comes with electric windows and a CD player.