By uprating the M3’s brakes and fitting massive, sticky tyres, the high-performance saloon’s stopping power is even better than the regular 3 Series’ braking ability. On top of this, you can add carbon ceramic brakes for even stronger braking, although they are quite expensive.

Being based on the 3 Series, the M3 retains the standard car's five-star Euro NCAP safety rating, so there’s plenty of peace of mind if you’re strapping your family in. Adaptive headlights and LED headlights (also adaptive) are available as options, as is forward collision mitigation, lane departure warning, preventative pedestrian protection and high beam assist.

Basically, the M3 will warn you as much as possible if it thinks you’re going to have a crash, intervening with autonomous emergency braking to prevent an impact if it senses that the driver hasn’t done anything to avoid the hit. 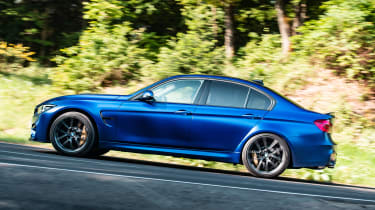 At the basic level, there’s ABS and a sophisticated ESP system to keep all that power in check – especially in the wet. There's also a reversing camera with 360-degree capability available as an option to help when manoeuvring.

Considering its prestige image, BMW has fared rather unremarkably in the Driver Power customer satisfaction survey. However, it regularly comes out on top in the battle of the three premium German brands, usually exchanging spots with Mercedes, but consistently finishing ahead of Audi.

We expect the M3 will prove reliable, as the interior tech has proven itself across the rest of the range, while the M Division-developed engine has done countless miles in testing and should prove strong.

Build quality feels good and the solid materials throughout the cabin reinforce this image. Driving the car hard, you also get a sense that the mechanicals have been properly engineered to withstand some punishment, which gives you the confidence to push harder.

BMW’s warranty is on a par with those of its rivals. The M3 gets a three-year, unlimited-mileage warranty as standard – and, if anything should go wrong, BMW also throws in three years of roadside assistance breakdown cover.

As a performance model, maintenance costs for the M3 are obviously more expensive than for a regular 320d. However, a price of around £1,000 for the five-year/50,000-mile servicing package is decent value and on a par with its rivals.