Plus four pairs of grid walk passes for runners-up 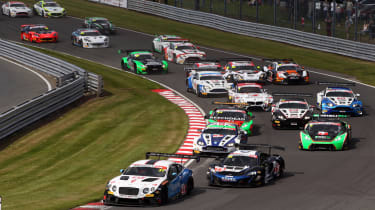 The British GT Championship makes its final stop of the season at Donington Park on 11 September, and you could be there to see both class titles decided in style, with supercars from Aston Martin, Bentley, Lamborghini and McLaren doing battle.

Pirelli is the official tyre supplier for the series, which sees all cars competing on just one specification of tyre, designed to be strong under all conditions. For dry weather, the GT3 cars have the P Zero DHC tyre and the GT4 cars make use of the P Zero DH tyre. For wet weather, both categories use the Cinturato WH tyre.

Auto Express has teamed up with Pirelli to offer a money-can’t-buy prize. As well as VIP hospitality and grid-walk passes for two, you’ll be treated to pre-race laps around Donington Park aboard British GT’s McLaren 570S safety car, before bringing the two-hour title decider to a close by waving the chequered flag!

Four lucky runners-up will also win a pair of general admission and grid-walk passes for the event.

For a chance to win this fabulous British GT experience simply answer this question:

Where will the 2016 British GT season finale take place?

Terms and conditions: No grid access for those aged 16 and under. Winners are responsible for their own travel to and from Donington Park. Prize valid for Sunday 11 September only. Safety Car passenger laps start at midday with sign-on beforehand. Passengers are subject to a safety disclaimer. Helmets will be provided. Total prize value non-refundable.