European and Asian car makers could soon outperform GM, Ford and Chrysler in the US, says Mike Rutherford 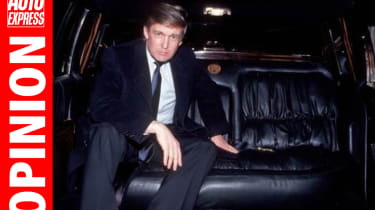 The trouble with Donald Trump is that he wants it both ways. Because he’s desperately trying to protect US jobs, he has a problem with cars built anywhere other than the USA. Fair enough.

Yet when Asian and European firms build new factories on his soil, then go on to prove the cars they build are generally better and more desirable than those from GM, Ford and Chrysler (the US Big Three), he has a very different kind of problem.

• Best American cars of all time

Those pesky Asians/Europeans/other aliens in the American south are only supposed to be the support act to the ‘true American’ manufacturers based in Detroit, not the headliners. In 1971, foreign auto makers built just one per cent of the vehicles that came off production lines in America.

Last year that figure stood at 47 per cent, and is likely to rise in the future. Trump can’t get his head around the prospect of his US Big Three building the minority of cars in his USA. And the revelation last week that yet another Chrysler factory in Detroit is closing offers further proof that Trump’s domestic auto firms are increasingly weak.

Britain unconditionally embraces foreign makers who build factories, create employment and build cars on our soil. But Trump seems torn by non-American firms producing ‘non-American’ cars on his patch in larger than expected volumes. In turn, European and Asian makers in America are fed-up with the lack of love from Trump and unimpressed they don’t have a seat at the Trump table in Washington.

Also, these nations are reminding the President that they’ve invested billions in the US, creating vehicle and engine plants, research centres, dealerships and decent, well-paid jobs. And the enormous tax revenues they and their employees generate help prop up Trump’s Treasury.

Meanwhile, the USA’s Detroit-centric auto unions are warning American motorists to buy only American-made products built at unionised plants. But since the vast majority of Asian or European car factories in the States, in addition to Tesla’s production lines, are union-free and far from the crumbling Motor City, these trade unions are effectively echoing Trump by urging Americans to buy Chrysler, Ford and GM products. US consumers are responding by ensuring that America’s top five selling cars are built by foreign firms in (non-union) US factories. They dominate the Top 20. The American Big Three do not.

What do you think of Mike’s argument? Have your say in the comments area below!