How technology could slash car accidents 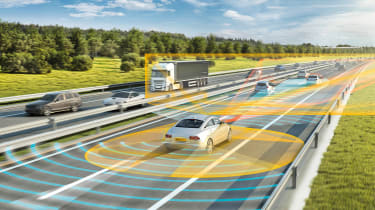 Last year, more than 1.2 million people died in road and traffic accidents around the world. That’s around one every 25 seconds. In the UK, the past 12 months saw 1,780 road fatalities, up by nearly 30 from 2015. In fact, for the past three years, road fatalities have failed to significantly decline beyond the 1,750 mark.

While some of this is down to fewer police officers patrolling our roads and cuts in council budgets, there’s an overwhelming statistic that cannot be ignored: 90 per cent of road fatalities are down to driver error.

This means that it’s our lack of judgment, lapses in concentration or lack of skills that lead to situations that place ourselves and others in harm’s way. But the good news is that engineering and tech companies are working with car manufacturers to reduce car accidents through technology.

Continental and Bosch, both firms which have deep roots in automotive safety systems, have adopted a programme called ‘Vision Zero’ – the goal of having zero road accidents in the future. Auto Express has rounded up some of the key technology they’re developing to achieve this ambitious target. 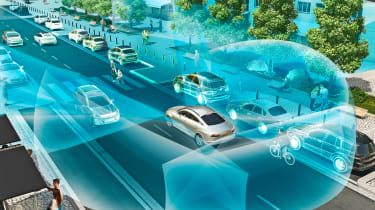 If driver error is to blame for 90 per cent of accidents, it makes sense to remove the driver from the equation.  Dr. Andree Hohm, head of Continental’s self-driving car project, believes “autonomous cars will be key to cutting down the unacceptably high number of road deaths”. To reach this, vehicles will have to achieve level 5 autonomy, capable of handling all driver duties.

Currently, manufacturers are approaching level 3, where the car does most of the driving, but requires the driver to take over in certain situations. However, recent research by scientists at the University of the West of England showed that in these scenarios, drivers are slower to respond because they’ve become accustomed to the driverless car, creating a hazard.

To ensure the driver is made aware of the upcoming switch, both Bosch and Continental have developed additional warning systems. If the driver fails to react, the car will alert them, then put on its hazards, gradually slow down and pull over to the roadside.

Dr. Hohm pointed out that the system will also be able to call the emergency services if the driver remains unresponsive, and in addition, Bosch’s system will be able to detect vulnerable road users such as motorcycles and warn the driver of their proximity when making the switch. 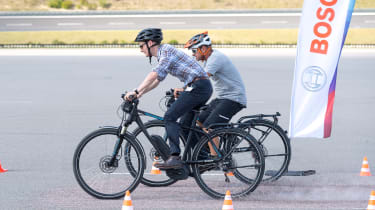 Many car accidents happen because drivers don’t pay enough attention. This is why Autonomous Emergency Braking (AEB) is a crucial piece of safety tech, as it’s been found to reduce rear-end collisions by 38 per cent, according to Euro NCAP. Cyclists account for over five per cent of all road fatalities around the world, and from next year, to gain full marks in Euro NCAP tests, cars will have to be able to automatically brake for them.

To account for the faster, more uncertain movements cyclists make, Bosch has developed a faster AEB system. Currently many of the cameras on board come with 22-degree optics, but to capture cyclists in the future, they need 100-degree lenses to ensure a wider field of vision. Bosch is working on linking two 50-degree lenses on the sides of the car, so they can spot cyclists who may join the road from a side street. The company has come up with faster processors to ensure the car is able to calculate the hazard and brake sooner. Bosch told us the system is also capable of spotting cyclists in thick fog and poor visibility. 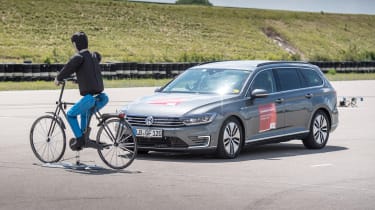 Simply helping cars avoid accidents with cyclists isn’t enough; cyclists also need to be better equipped. As befits the company that helped invent ABS, Bosch is bringing the braking tech to bicycles. The firm has built the world’s first bespoke ABS system for eBikes – bicycles that use a small electronic motor to increase power.

The set-up not only slows the bike down more quickly, but also prevents the rear wheel from lifting under hard braking, ensuring cyclists won’t flip over the bars. 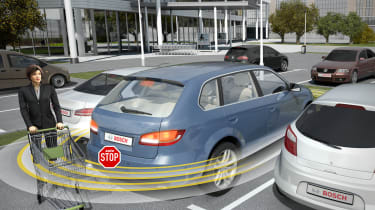 Vehicles backing into busy roads or out of parking spaces at shops are a hazard to both other road users and pedestrians – which is why Bosch has come up with a reversing AEB system. Application engineer Manuel Eckelt explained how the system works, saying: “It uses four next-generation Ultrasonic 6 sensors, placed in the rear of the car, that allow it to see objects 5.5 metres away.

“It works at speeds of up to 15kph (9.3mph), and will brake if it senses the driver has not spotted a hazard.” The system will be crucial in preventing accidents where drivers have to blindly reverse out of parking spots. 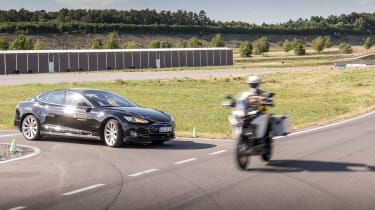 In emergencies, every second counts, which is why Continental has come up with a new MK C1 hydraulic brake extension unit to speed up autonomous braking. The system is “fail operational” according to engineer Holger Schmidt, who explained that in the instance the main brake system fails, the second back-up system will build “brake pressure externally to ensure braking can be fulfilled in an emergency”.

Another key development with the MK C1 system is that it can build up maximum braking pressure in just 150 milliseconds, or twice as fast as conventional systems, to ensure the car stops as quickly as possible. 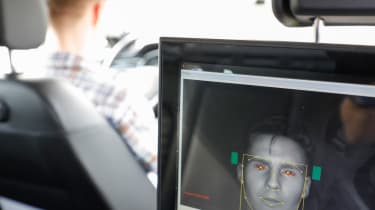 Cars won’t just be analysing potential threats outside in the future; they’ll also be monitoring drivers to ensure they don’t fall asleep or lose focus. Continental has developed a driver analysis system that monitors a driver’s gaze and warns them if they’re not paying enough attention to the road. Two cameras embedded in the dash analyse eyelid closures and calculate line of sight.

Dr. Alexander Biederman, an engineer working with Continental’s driver analysis projects, said: “We use laser measures to determine the eye’s line of sight. This allows the computer to determine exactly where the driver is looking. We’re able to analyse how often and frequently a driver closes their eyelids and use it to prevent drowsiness and warn drivers of it.”

Auto Express got behind the wheel of a modified VW Passat installed with a prototype of the system. The moment we began to close our eyes for too long or look at things like the sat-nav for extended periods, an alarm sounded in the car. “This is obviously an exaggeration of what the warning will be like – the system is set up at its most sensitive,” Biederman said. Once in production, Biederman sees the alerts either being sent as vibrations through the steering wheel or the seat. 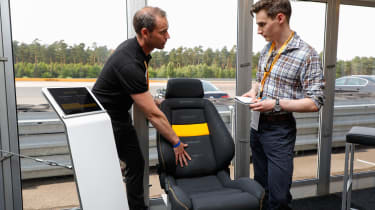 In the future, the driver’s seat won’t just be alerting drivers if they are losing focus; it will also analyse their health. Florian Rodina, a marketing manager from Continental, explained how the company’s future car seat works: “Using four inbuilt thermal sensors across the seat, the driver analysis system can identify things such as body temperatures and humidity levels. This can help the car determine whether the driver is stressed or anxious, and can, for example, turn on the air-con to cool the driver.”

In the future the sensors will be able to pick up things like heart rates and even breathing patterns to see whether a medical emergency is likely. 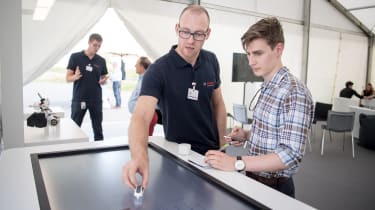 For most, mobile phones are an unwelcome distraction in a car, but Bosch is working on a way to turn a driver’s phones into a warning device.

Its ‘Wrong-Way Driver Warning’ system detects when a motorist is driving the wrong way and will warn others of the impending danger. Christian Jeschke, a product developer of the system, explained: “In Germany alone, 2,000 fatalities are caused by drivers driving the wrong way each year – with many of these suicides.”

Jeschke and his colleagues have developed software that embeds into existing mobile apps, and once it detects a car is moving in the wrong direction it will warn the driver and other motorists to pull over. Jeschke said: “The system activates once it realises you’re heading in the wrong way. It’s kind of like a sleeping safety device that only turns on when it detects that a driver is heading the wrong way.”

Can car accidents be completely eradicated by technology? Tell us what you think below…